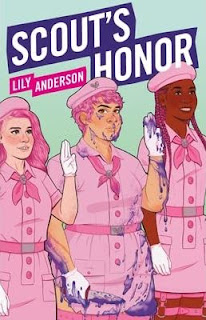 Scout's Honor by Lily Anderson
Publication date: April 5, 2022
Pages: 416 pages
Rating: 3 out of 5 stars ☆☆☆
Sweet Spark: "Okay, babe, I get why you have to kill them." "Headquarters prefers the term banish. It's friendlier."

This fun read was a YA book for my local book club. I have to admit I put off starting it way longer than I should have. I saw 'scout' and thought it was like another WW2 story or something. Boy, was I off base!

Ladybird Scouts are able to see - and banish - interdimensional creatures who feed on human emotions. While their feeding is usually just disruptive, once they consume enough emotion, they get bigger and eventually able to feed on real humans! Obviously, a problem.

Prudence Perry knows the real risk of hunting the creatures (called mulligrubs), and lost one of her best friends to a carnivorous grub. Even though she's a third generation Ladybird, she wants nothing to do with her ability to See them, or responsibility to banish them, anymore. Until she ends up forced back into the sisterhood by her mother.

Prudence learns that being a Ladybird Scout may not be just a burden, and maybe she is still strong enough to protect her friends.

I really enjoyed this book and gave it every bit of 3 out of 5 stars. Depending on your reader, it may even be acceptable for a high middle-grade read. The characters were fun and unique, and their mission was one I never imagined.

Posted by Becki at 7:53 PM
Email ThisBlogThis!Share to TwitterShare to FacebookShare to Pinterest
Labels: Books - 2022