Our Disney and Twirlmania Trip - Part 1

Well, nearly a month later, I feel like I may be recovered enough to sit down and recap our trip. LOL How does a vacation always lead to the need for another vacation? Although our trip wasn't just a vacation. My 10-year-old daughter Maggie and I headed to Orlando, Florida so she could compete in the international Twirlmania baton twirling competition.

We left a month ago yesterday. Flights were almost $400 for each of us on their cheapest day, so we piled into the Durango and hit the road for our 18-hour trip. I was still in the probationary period for my new job, so leaving at 9:30am on Tuesday let me miss one less day. Our goal on that first day was to get south of Atlanta. See, there's no good time to drive through Atlanta, so we figured the best pick would be late at night. We got to our hotel that first day at about 11:30pm. Goal achieved! 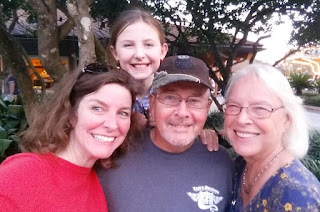 Wednesday morning of our trip, we woke up promptly at 8am to drive the home stretch (a little more than 6 hours). An uneventful drive finished at 3pm, when we met my parents at our hotel! My parents are snowbirds (Michigan retirees who spend the winter in warmer weather) and have been camping about 45 minutes from Orlando for about a month. We were so excited to be able to see them before their return home in April...or May, the way the winter is lingering...
That afternoon/evening, we headed to a Cracker Barrel up the street for some dinner, then wandered around Disney Springs together. Loved Disney Springs! It's free parking, and nice to wander around and look at the souvenir shops and such. After our evening, Maggie was eager to swim in the pool. It was already dark, but she had fun with some other kids for an hour or so. 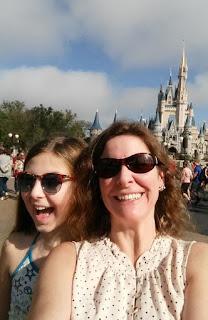 Thursday was our big chance to get to the Magic Kingdom! We could only stay until early afternoon, since we had a competition orientation at the ESPN Wide World of Sports starting at 4pm or so. While we had big hopes of getting to the Magic Kingdom when they opened, it was still vacation, so we didn't motivate quite that promptly. Once in the park (and relieved that our $22 parking fee was transferable to other parks the same day), we wandered around a bit to get the lay of the land, then headed to our first Fast Pass ride - the Haunted Mansion. When we were picking our Fast Passes before we left home, Maggie had a few she wanted to pick based on other people's recommendations, while I wanted to visit some classics I remembered from visiting the parks years ago. The Haunted Mansion was a classic that she and I both loved. She's always been like me in enjoying stuff that may be a little spooky or goth-like. I don't think we'll ever skip the Haunted Mansion on a Disney trip.
It's been a while, so I don't remember exactly how I did it, but I canceled one of our Fast Passes, thinking I could get another one instead, but I couldn't. So after our Haunted Mansion ride, we had a little time with nothing planned. As we walked toward our next Fast Pass ride, we saw that the line was short for Under the Sea - Journey of the Little Mermaid. While a lot of a Disney trip is waiting in line, Disney is always sure to make even the line entertaining. We only waited a half hour or so before we rode in our shell and heard the story of the Little Mermaid.
We left Under the Sea just in time to make our Fast Pass at "it's a small world." This was another classic pick of mine, that Maggie was also happy to experience. 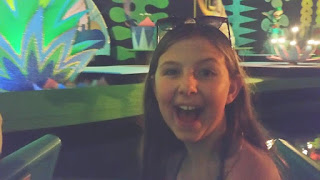 By the time we were done with "it's a small world," it was time for us to hustle back to ESPN Wide World of Sports (otherwise abbreviated as EWWW) for the Twirlmania competition orientation, and to pick up our competition schedule. Because this was such a large competition, they were running it all on the 'set system.' This means we had the time and lane for Maggie to compete in each event. If you missed it, you missed it, but luckily we never missed it. Parents stayed in the stands, well away from the competition floor. There were about 24 lanes on the floor, with several events occurring simultaneously at any given time. The competitors just needed to know which set number, which lane, and which event they were performing. Besides the set system, getting ready for competition was the same as ever - find your name and events on the schedule and hi-light so you can find them all later. Thursday afternoon was just orientation though - finding our way around the building and making sure we understood where to be and when. We were done within a couple hours.

Thursday was still a high energy day, so we headed to Animal Kingdom for the couple hours left before they closed. First we were just sort of wandering around to see what was there. I remember going on Kilamanjaro Safari when visiting the park previously, and they only had a wait of 45 minutes or so. We headed to the line, and a nice young girl stopped us to ask if we wanted to go on the ride. Of course we did, and then she told us she and her friend had extra seats with their Fast Pass! We were able to go on the ride with Lauren and Carly right away. They are locals of the area, and knew all the secret spots to look to find the best animals on the safari. Meeting them was a wonderful bright spot of our trip. :)
We met up with some twirling friends after that and watched part of the Tree of Life show. Watching the animals move around the giant tree is gorgeous and amazing! Our friends visit the parks more regularly than we do, and let us know that as long as you're in line for a ride when the park closes, you will get to go on the ride. So we headed for the very popular Avatar Flight of Passage. Maggie and I had watched (or re-watched, in my case) the Avatar movie before heading on our trip, because we'd heard how popular this ride is. While an average wait time is several hours, we waited just a little more than an hour, I think. And then the ride 'broke' when it was almost done, so we got to move, start over, and do the whole ride again. It's totally incredible and I definitely recommend getting a Fast Pass for this one if you're headed to Animal Kingdom. It has also convinced Maggie that maybe she could ride a roller coaster.

By the time we were done with Avatar Flight of Passage, the park was closed and we headed back to the hotel for a good night's sleep.

I realized how long this is already, and we've still got three days left! Be sure to read Part 2!
Posted by Becki at 9:19 PM
Email ThisBlogThis!Share to TwitterShare to FacebookShare to Pinterest

Sounds like you packed a lot in to your trip! Interesting that the Avatar broke ... I enjoyed Flights of Passage but was glad I did not wait 3 hours for it, lol (we had a fastpass). Also, $22 for parking at the park? Ouch.

Wow you really packed a lot into each day. I look forward to hearing about the rest of your trip.

I’m exhausted just reading the story. I love meeting locals that bring you in the loop.

Wow, what a crazy busy, but fun getaway! I'm counting down the days until we get to visit there!