I was so excited to be in the loop and able to learn about Bookstock returning to Laurel Park Place (on 6 Mile Road east of I-275 in Livonia) in a couple weeks! This will be the first year I'm available to attend, and the kids and I are super excited to go stock up on books at great deal prices, while helping the community.

Bookstock’s Pre-Sale will kick-off on Sunday, April 23 at 8:15 a.m. with a performance by Livonia’s Churchill High School Drumline. There is a $20 admission charge for the Pre-Sale only, which runs through 11 a.m. and offers savvy shoppers and collectors first crack at Bookstock’s treasure trove of bargains. Bookstock has over 200,000 donated used books, DVDs, CDs, books on tape, magazines and records for sale at bargain basement prices. The sale will continue through Sunday, April 30, running Sundays, 11 a.m.-6 p.m. and Monday through Saturday 10 a.m. – 9p.m.

Check out this great lineup of activities: 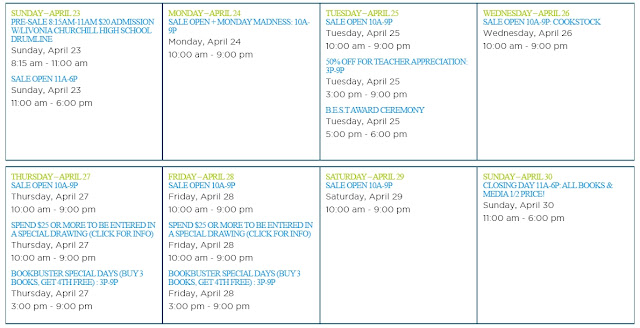 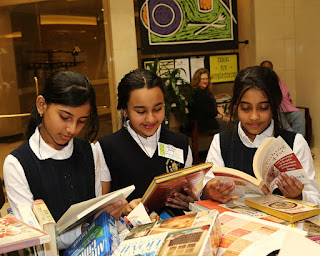 Marking 15 years of supporting the need to read, Bookstock has generated nearly $1.7 million for literacy and education projects throughout Oakland County and Detroit. More than 800 volunteers work together throughout the year to organize and staff the weeklong Bookstock sale.
Bookstock is brought to the community by the Jewish Community Relations Council/AJC, and a consortium of non-profit organizations that support education and literacy projects throughout metro Detroit.

For more information about Bookstook, call the Bookstock hotline, (248) 645-7840, ext. 365, or visit bookstockmi.org.
Posted by Becki at 2:23 PM
Email ThisBlogThis!Share to TwitterShare to FacebookShare to Pinterest

I'm excited to actually go this year! I bet they have a great selection of books.

This sounds amazing! We are avid readers and I always hit the local libraries used book sales too!

I have not make it to this yet, but I always want to go. This is a great way to get used books for kids too. We use the books for gifts and motivational prizes.

what a great deal for book lovers!

Amazing event and activities. Would love to participate in one too. Hopefully soon!

WOW! This looks like a packed event! I like the reading component that was added this year.