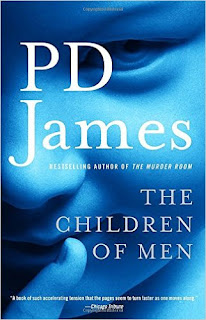 I've finished my fourth book in the 2017 Popsugar Reading Challenge. For the 26th category on the list, I read 'a book by an author from a country you've never visited.' Luckily for me in this case, I haven't visited very many countries. PD James (Phyllis Dorothy James, Baroness James of Holland Park), was born and much later died in the United Kingdom. I assume she lived there during all the time in between.

I chose to read The Children of Men by PD James due to my recent hankering for dystopian fiction. I saw the movie years ago, when I was pregnant with my daughter (by the way, TERRIBLE movie for a pregnant woman). Hubby and I watched the movie again last week so I could compare it to the book. TOTALLY different.

Anyway, back to the book. The narrator of the book was a cousin to the 'Warden' of England, who was now in charge. The whole story takes place 25 years after the last child was born in the world. A lot of the story is influenced by the politics of the era, and how a new baby could be a political tool. The movie focused more on the fact of a baby, but not as much on the political repercussions. I did enjoy the book more than the movie, but I think a lot of what was 'missing' from the movie would have been very difficult to portray, especially since the movie already ran almost two full hours.

I would recommend this book if you enjoy dystopian fiction. I'm glad I'd forgotten the movie (from the first time I saw it) by the time I read the book. The book is definitely a fuller experience than the movie.
Posted by Becki at 11:38 AM
Email ThisBlogThis!Share to TwitterShare to FacebookShare to Pinterest
Labels: 2017 Reading Challenge

Interesting book. I've heard of the book but haven't read it. I might give the book a try. Well, I might add it to my growing huge pile.

I think it is wonderful that you are picking up a book and reading it. I need to make time for a good book. One that takes my imagination to a new level.

Interesting choice. I do like a good dystopian fiction novel. I haven't head about the PopSugar Reading Challenge; I'll have to check it out!

Sounds interesting. I've been terrible lately about following through with my reading.

Never heard of this book title before but it;s really interesting. Will check it out and see if I can read it too!