It's not too late for the Detroit Zoo's Wild Summer Nights concert series!

You have two weeks left to enjoy the fun :)

The Detroit Zoo gets even wilder on Wednesday nights during July and August with its annual Wild Summer Nights concert series.

Concerts take place in the Zoo’s Main Picnic Grove from 6:30 p.m. to 8 p.m. July 2 through August 27.   Wild Summer Nights features a variety of live music from local bands, including children’s, jazz, pop, folk and blues.  Concert-goers are invited to bring a blanket and pack a picnic.  Food, snacks, beer, wine and soft drinks are available for purchase from Zoo concessions.

The concerts are free with Zoo admission, which is $6 after 6 p.m. on Wednesdays in July and August. For the first 100 non-member car or vans that arrive at the Zoo for the Wild Summer Nights, Ford Motor Company will be paying for your parking of $6 (Members receive free parking). Plus, the Zoo remains open until 8 p.m. on Wednesdays during the concert series.


Valvoline Instant Oil Change will also have a booth where they'll be giving out candy, coupons, and prizes from their spin-to-win wheel! They've also provided a coupon for me to share here - good for zoo members and non-members alike :) 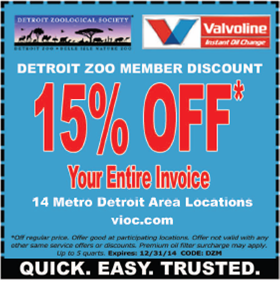 Posted by Becki at 2:44 PM
Email ThisBlogThis!Share to TwitterShare to FacebookShare to Pinterest