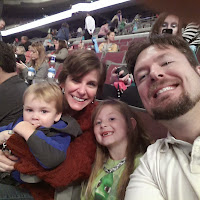 We had an action packed weekend! It started way back on Thursday with Disney on Ice. Always fun! We knew Maggie would enjoy it - she always does. But we were delighted to watch Jack be totally captivated by the activity on the ice this time.

Although he wouldn't care yet, the princesses role in the whole show was not much. There were brief numbers in the first half by four or five princess (with their story and their prince) and then a bigger act with a bunch of the couples. But by the time the second half started, the princess were gone. We saw Stitch, the Incredibles, It's a Small World (possibly my favorite scene), and the Lion King, to name just a few. Can't wait to go again, now that the whole family enjoys it :) 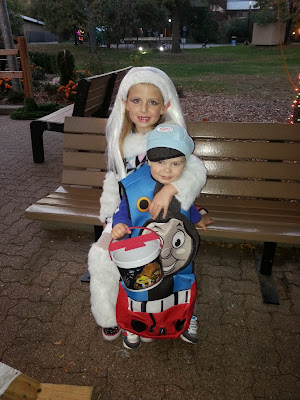 Our Friday night was touch-and-go for a little bit. Maggie's been fighting a cough for a week now, and I finally decided to take her to the doctor and make sure that's all it was. Yup. The doctor recommended a homeopathic cough syrup (although I still haven't found the exact one he mentioned), and prescribed her an inhaler just for the weekend.

Armed with that, we headed to the Detroit Zoo's annual Zoo Boo on Friday night. Maggie was excited to don her Abby Bominable costumer, and of course there's no one Jack would rather be than Thomas the Train. In fact, Jack spent part of his evening chasing another Thomas costume, with a really cool bucket.

Still want to see the cool decorations and collect lots of loot at Zoo Boo for yourself? There's still one weekend left, although I'm not sure how many tickets are left.
Posted by Becki at 11:50 AM
Email ThisBlogThis!Share to TwitterShare to FacebookShare to Pinterest

what a fun weekend. I remember we did lots of stuff all of the time but we never got exhausted, but had fun. I'm sure you did too.