Friday hubby had off work for a medical test he needed, so Maggie and I did our best to cater to his needs and make him as comfortable as possible...until 6PM when his dad came over instead, and 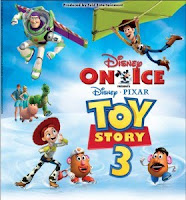 Maggie and I met up with friends to head to Disney on Ice!

We all had a great time at the show. Joel's mom wasn't sure if he'd really want to sit and watch the whole thing, but he was really into it and having a ball! Maggie's biggest concern during the whole first half of the show was only that she wanted cotton candy.
While the show was great, I was really disappointed when we first arrived and there were NO BATHROOMS after the hour drive until after we waited in line at will-call to get our tickets, and then waited in line again to go through security, before going up about a billion steps to the nearest bathroom. It was close, but Maggie was luckily able to hold it!

Saturday I was excited to head to Toledo for our first Dove Chocolate Discoveries team meeting there. It was really fun getting to meet one of our new team members, reconnecting with Jacki, our marvelous host who has been doing the business for a while, and signing up another new member for our Toledo team! I'm really excited to expand that area, since I regularly get company leads from people in and near Toledo looking to have their own chocolate tasting parties.
Hubby headed out with some work friends Saturday night, but he had time to take us to a delicious dinner at East Side Mario's. I still get to have leftovers for lunch tomorrow - bonus!

Sunday the time sprung forward an hour, which of course means we started out what felt like an hour later than usual. Fortunately I'd started preparations for Sunday's chocolate tasting on Saturday night while hubby was out, so I was able to be on time by the show in the afternoon. The show was a good time, and my hostess will have fun picking out $75 in free chocolate tomorrow!
With the running late and time issues, I missed having a good lunch, and ended up with a killer headache by the time we got home. Hubby was nice enough to let me try and sleep it off - yay!
Although we ended up with a late dinner, I'm feeling better now and have gotten a lot of stuff accomplished this evening.
I'm ready for a fresh Monday start and another productive week!
Posted by Becki at 11:58 PM
Email ThisBlogThis!Share to TwitterShare to FacebookShare to Pinterest
Labels: Weekend in Review