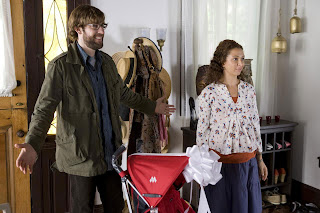 Hubby and I watched Away We Go starring John Krasinski and Maya Rudolph last night. I thought it was pretty funny. It was about Burt and Verona, two people about to become parents. They are trying to decide where they want to live and raise their baby, and the friends and family they meet up with on their travels run in all extremes! Here's some of the funniest quotes from the movie (probably even funnier out of context - that's how I roll...).

LN: I LOVE my babies. Why would I want to PUSH them away from me?

Beckett: Babies like to breathe, and they're good at hiding it. I put a pillow over a baby. I thought she wasn't breathing, but she was. She was sneaky, but I'll try again.

(okay, this one isn't a funny quote, but I really wanted to share it anyway)

Tom Garnett: She had another miscarriage.
Burt Farlander: What? When?
Tom Garnett: Thursday.
Burt Farlander: This Thursday?
Tom Garnett: Yeah. This is her fifth. I know she loves all those kids like, like they were her own blood. But, I wonder if we've been selfish. People like us we wait till our thirties and then we're surprised when the babies aren't so easy to make anymore and then every day another million fourteen year olds get pregnant without trying. It's a terrible feeling, this helpless, man. You just watch these babies grow and then fade. You don't know if you're supposed to name them, or bury them, or... I'm sorry.

Burt Farlander: Do you promise to let our daughter be fat or skinny or any weight at all? Because we want her to be happy, no matter what. Being obsessed with weight is just too cliché for our daughter.
Verona De Tessant: Yes, I do. Do you promise, when she talks, you'll listen? Like, really listen, especially when she's scared? And that her fights will be your fights?
Burt Farlander: I do. And do you promise that if I die some embarrassing and boring death that you're gonna tell our daughter that her father was killed by Russian soldiers in this intense hand-to-hand combat in an attempt to save the lives of 850 Chechnyan orphans?
Verona De Tessant: I do. Chechnyan orphans. I do. I do.
Posted by Becki at 9:15 AM
Email ThisBlogThis!Share to TwitterShare to FacebookShare to Pinterest