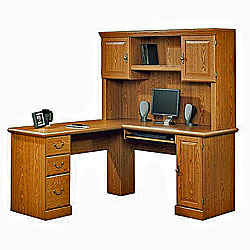 So when hubby says we're looking to buy something in particular, I'm usually pretty half-hearted about my helping look, because I feel he usually ignores my input anyway. But the other day I sent him a Craigslist ad for a desk for my office, and he said we're picking it up on Wednesday! Woo-hoo!! I'm not sure how it'll work in my office, but he said we'll make it fit. I hope so!
We really wanted to find something with a little more 'built-in' storage, since my current desk was really just intended as a computer stand, and has no where to keep my stuff. Which means the surface is COVERED with my stuff, to the point of making it barely usable for me, and unusable for him :( The new one looks like it'll solve that issue, and give me a little extra work space instead of always carrying stuff to the kitchen table to finish up!

I'm really excited to be going to the Longaberger Homestead in Ohio tomorrow. My mom's been before and liked it, and I've just always wanted to go! It's about a four hour drive each way, so it'll be a day trip. But this means I should try to get to sleep a little earlier than usual tonight, since I want an early start in the morning! So why am I posting? Ahhh....good question, grasshopper...
Posted by Becki at 10:09 PM
Email ThisBlogThis!Share to TwitterShare to FacebookShare to Pinterest

good thing you got this picture - our efforts didn't turn out so good. :) Looking for the pictures we did take though.