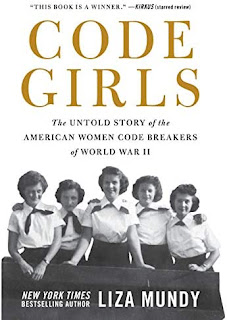 Code Girls: The Untold Story of the American Women Code Breakers of World War II by Liza Mundy
Publication: October 10, 2017
Pages: 448 pages
Rating: 4 out of 5 stars ☆☆☆☆
Sweet Spark: Truly inspirational - these are the women I hope I would have been smart enough to join forces with if I'd been around during this time.

The women who helped so much in World War II were 'accepted' to help because they enjoyed crossword puzzles and didn't have plans to marry soon. What a world, eh?

Code breaking wouldn't have been considered to be 'women's work' if so many men hadn't already left to fight in the war. But when the powers that be had to work with the talent that was left, they hoped women would be good at this monotonous, detailed work. Boy, were they pleasantly surprised!

The story of the women joining up or being hired to crack the codes was great, but my favorite part was following a few of the same women through their careers and beyond. I especially liked the follow-up, where the author talked about hearing from the women or their descendants after publication of the hardcover book, in time to mention in the paperback afterword.

Overall, I'd give this book 4 out of 5 stars and recommend it for those who like women's stories, US history, and non-fiction. I was also pleased to find that it's a choice in my daughter's high school English class when they study non-fiction. These inspirational women deserve to have their stories told and heard by as many as possible.

Posted by Becki at 4:24 PM
Email ThisBlogThis!Share to TwitterShare to FacebookShare to Pinterest
Labels: Books - 2022