The Stranger Beside Me - Book Review 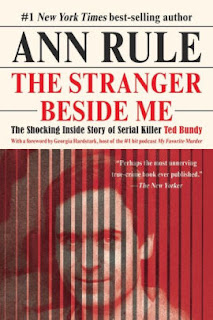 This was the true-crime book picked for my Yelp! book club. While it was first published in 1980, several additions have been made, and I was happy to read the newest edition.

The original publication was the chilling and graphic story of serial killer Ted Bundy. The now-famous true-crime author Ann Rule worked with him prior to his arrest at a crisis line in Seattle, WA. So what I found particularly chilling is that Ted Bundy likely saved some lives... odd.

There is no definite answer of how many women Ted Bundy killed. While authorities had it at 36, Bundy responded that they were missing a digit. 136? 360? Terrifying! It was fascinating to be able to read Rule's perception of him as an average co-worker, and following through to her realization that he was in fact a murderer.

I really appreciated the follow-ups added in the years since the original 1980 publication. Especially curious for me was the stories Rule had heard from women who told their stories of their near-misses with Bundy. Women who were picked up, but then he let go. Or women who were approached in public and felt the need to leave the situation ASAP.

Overall, the book and the anecdotal stories were a great read for me and I give it 5 out of 5 stars. While I seem to remember reading other Ann Rule stories in the past, I think this was my first time reading this, as it will be hard to forget.

Posted by Becki at 5:31 PM
Email ThisBlogThis!Share to TwitterShare to FacebookShare to Pinterest
Labels: Books - 2022