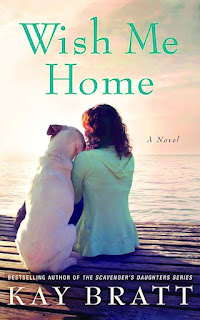 Wish Me Home by Kay Bratt
Publication date: March 21, 2017
Pages: 302 pages
Rating: 3 out of 5 stars ☆☆☆
Sweet Spark: What if you found out the struggles in your life could have been different...or avoided altogether?

This was a read for my book club. It was a contemporary story that started out as a cozy and reassuring story about the unbreakable bond between a girl and a dog. As the story went on, though, the girl had to learn that some humans aren't too bad either.

Although it was mentioned several times, I frequently found myself forgetting that Cara, the main character, was around 30 years old, instead of a teenager. She's on a mission that we don't initially know about, and needs to get to Key West. Luckily, early in her journey she meets up with Hemingway, a dog she names for herself who won't take no for an answer when he's offering his company - and sometimes protection - on their journey.

It was great to see the goodness in people, even when they didn't need to show it. People being kind when there's nothing in it for them is something this world needs more of. I gave this book 3 out of 5 stars. It was a nice contemporary story about rising above one's circumstances and maybe even grabbing happiness along the way.

Posted by Becki at 9:08 PM
Email ThisBlogThis!Share to TwitterShare to FacebookShare to Pinterest
Labels: Books - 2022