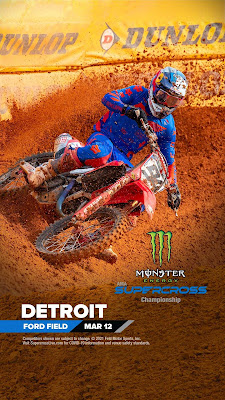 Saturday night we got to go to Ford Field and see the Monster Energy AMA Supercross Championship for 2022. The races were so fun, but I was grateful that my husband does some car racing on his own and could explain things to me.

If you go without my husband next year, know that the 'Leader' posts (they're yellow) at a few of the corners light up when the leader goes by. Very helpful when you've lost track of who's winning! They also announce how many places are moving forward to the next race - good information for figuring out which place is the one to watch. I appreciated the variety of colors both for the riders to wear, and for their bikes (so I could say stuff like, "Watch that orange guy on the white bike with the purple fender!").

We did bring ear plugs, but only my ten-year-old wore them. With that said, they did not stop the fireworks from startling him. I saw some friends comment that they were bringing kids who were a bit nervous about loud noises (like mine). Luckily the fireworks were few and far between - mostly near the beginning of the event. 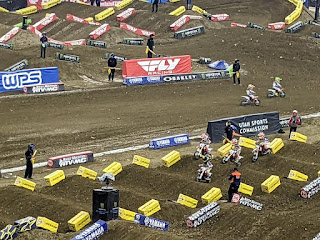 One of our favorite events (and I apologize for not listening better to the announcer) were the kids on the smaller bikes. Yeah - there was probably a more official name, but I missed it. While their bikes didn't 'fly' over the jumps like the 250s and 450s, they were still hustling and competitive, hoping to win their spot!

Maybe I just missed a program somewhere along the way, but my daughter and I were wondering how many women were racing. We were really excited when we thought a woman won one of the races because we'd seen dark hair flying out from under a helmet (sorry, dude with long dreads).

In reviewing the few pictures I tried to snap during the event, I wish I'd gotten one of the enormous jump they did as they crossed the part of the track that was the finish line at the end of each race. They were seriously flying! I had been impressed when they jumped several hills at a time, but I don't know what they were so eager to stay away from in that enormous jump at the other end of the arena. 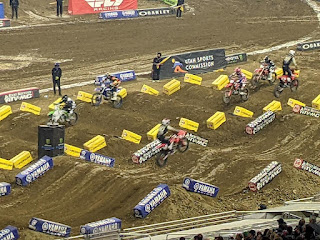 While I wasn't too sure what I was getting into, my family and I had a really good time at the Supercross, and plan to attend again next year.

Ford Field is a great facility. While dirt bikes and mud may not have viewers expecting much, the seats were comfy (if legroom was limited), the bathrooms were clean and well supplied, and there was plenty of food and beverages available for purchase. I was curious about the food stalls that were closed, and wonder if there are more open during football games, or things are just getting back to 'normal' slowly.

Masks were recommended by Ford Field in the email sent before the event, but I saw less than five people with masks on. Just an FYI.

Posted by Becki at 5:27 PM
Email ThisBlogThis!Share to TwitterShare to FacebookShare to Pinterest