Before the Coffee Gets Cold - Book Review 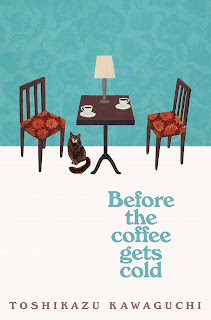 Before the Coffee Gets Cold by Toshikazu Kawaguchi
Published: December 6, 2015
Pages: 213 pages
Rating: 3 out of 5 stars ☆☆☆
Strengths: Characters and lessons
Weaknesses: Little continuity of the storyline

When my book club met about this book, someone mentioned that it (and its sequel) was originally written as a play. And that made it all so much more clear. I would LOVE to see an actual production of this.

With that being said, a novelization of a play definitely reads differently than an actual novel. Since I admittedly did not finish the book before our book club met (first time this year, I swear!), I read the second half from a different perspective. The writing was a bit choppy for me, which I had just attributed to the language difference and the possibility of some depth lost in translation. In retrospect, it was the difference between something being written as a play and waiting for someone to add a bit of their own characterization and acting to the performance.

I loved the characters, if the foreign names were a bit challenging for me to remember and keep straight. The lessons they learned through their time-travel journals to those they had lost in one way or another were priceless.

I'd give this book at least 3 out of 5 stars, and would like to read the second book to see what additional insight it lends concerning the cafe and the core characters. And as stated previously, I would LOVE to experience an actual theater production of it.

Posted by Becki at 2:53 PM
Email ThisBlogThis!Share to TwitterShare to FacebookShare to Pinterest
Labels: Books - 2021