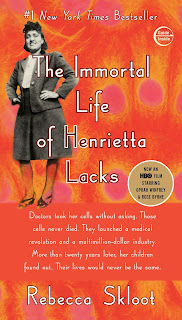 The Immortal Life of Henrietta Lacks by Rebecca Skloot
Publication date: February 2, 2010
Pages: 370 pages
Rating: 4 out of 5 stars ☆☆☆☆
Strengths: So much truth (non-fiction does that)
Weaknesses: Truth isn't always happy

While non-fiction isn't usually my first pick, this was a fabulous book that I would recommend. It's the story of Henrietta Lacks,  the woman whose cancer cells became known as HeLa and are still used in so much research and development around the world. Sadly, she probably didn't even realize what a 'cell' really was. Her physical contribution has changed the face of medicine, but her family doesn't even have health insurance.

The author does spent an immense amount of time with Henrietta's surviving family members - especially her daughter, Deborah. She tried to get as much of the story from as many people as possible, but still somehow left herself out of it, which sounds like quite the amazing feat. I don't think I've ever read something with such unbiased presentations of the people in the story. No one was cast as 'good,' or 'bad,' they were all just their own people, with their own lives, loves, and agendas.

Overall, I'd give this book 4 out of 5 stars. The subject is fascinating, and I can't imagine it being told any better than it was. The life of Henrietta Lacks, and the continuing life of her cells, show an intricate world of the differences in races, roles, and understanding of different perspectives.

Posted by Becki at 8:29 PM
Email ThisBlogThis!Share to TwitterShare to FacebookShare to Pinterest
Labels: Books - 2021