I was looking back at some older posts and memes I'd done in the past (so weird to flat out not recognize things I know I wrote! LOL).

Anyway, welcome back to Saturday 9 with Crazy Sam Winters! This week's theme is One Bad Apple, and is inspired by One Bad Apple (1971) by The Osmonds. 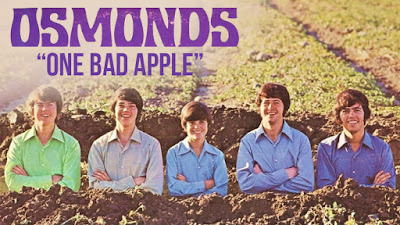 Now on to our nine questions:

1) This song is a play on the old saying that one bad apple can spoil the bunch, or that the bad behavior of one member can reflect badly on the whole group. Do you think that's true? Hmm...I absolutely think the bad behavior of one person can reflect on their whole group. To mix up my phrases, 'birds of a feather,' and all that. I tell my kids all the time that we all become like those people we spend the most time with, and that can be good or bad....
2) The Osmonds began as The Osmond Brothers, a barbershop quartet that performed at the original Disneyland in Anaheim, California. Today there are 9 Disney Resorts all around the world, as far away as Shanghai. Have you ever been to a Walt Disney property? I've been to the Disney Parks in Florida a few times. Getting ready to plan another trip there in a year or so (the first trip for my son!).
3) By the time the Osmonds made this record, Donny had joined the group and became their breakout star. Without looking it up, can you name any of the other four brothers who performed in video clip? That's a big nope from me.
4) In the 1970s, adolescent girls learned through teen magazines that Donny's favorite color is purple, and that he was especially fond of purple socks. Today, socks are a very big business. There are designer sock manufacturers and even a sock of the month club. Is there a wardrobe item you're very particular about? I don't know if I'd really say an item...but if I had to, it would be my hoodies and/or t-shirts. I guess I don't really have a lot of anything, and I tend to just keep my favorites and not hoard much more than that.
5) Donny and younger sister Marie had their own TV variety show. One regular segment had them performing a medley of popular songs, and it began with Marie singing, "I'm a little bit country," followed by Donny's musical reply, "I'm a little bit rock and roll." In this regard, are you more like sister or brother? Meh. I go a little bit either, but neither is really a favorite. I tend to like a little bit of everything, but most of what I have is from when I was gathering more things...the 80s. LOL
6) Donny's popularity continues today. Fans have seen him win Dancing with the Stars (season 9) and come in as a runner up on the first season of The Masked Singer. Do you watch either of these shows -- or other competition series, like American Idol, The Voice, America's Got Talent, etc.? I may catch a bit of an episode here and there, but we haven't had cable television in 15 years or so. Now you can stream pretty much anything, but we're out of the habit. I usually watch one show that I seek out, until it's done. The last show we watched through was Schitt's Creek (amazing!). I think the last reality tv-ish thing I watched all the way through was the Bret Michaels' show, Rock of Love. Hahaha...

7) Donny has also appeared on Broadway. He surprised audiences and got rave reviews as arrogant bad guy Gaston in Disney's Beauty and the Beast. Tell us about a time when your behavior surprised those who know you well. Gosh. I really don't know. I think I'm pretty predictable?

8) Donny is also a grandfather, many times over! Sam admits she's not crazy about that revelation because it makes her feel old. What's something that makes you feel your years? My husband plays this great game where (since he's three years younger than me) he finds friends of ours (a lot of his friends are younger than me) that have parents closer to my age than our friends. LOL

9) Random question: We're filling a pinata with your favorite candies. What should we buy? Oh dear! I'm a bit of a sugar junky - wouldn't be hard to make me happy! I love Chewy Sprees, but they'd be tricky in a pinata. How about some of those great peppermint starlight hard candies, or Riesens, or Werthers hard candies.. I'm pretty much like Buddy the Elf - does that have sugar? Hahahaha...

Posted by Becki at 9:33 PM
Email ThisBlogThis!Share to TwitterShare to FacebookShare to Pinterest
Labels: Saturday 9

The Gal Herself said...

You know, I can't think of two singers that have LESS in common than Donny Osmond and Brett Michaels. :)

You, me and Buddy are on the same page on the candy thing.

I agree on Schitt's Creek!

I enjoyed reading the song history. I liked both groups.

Thanks for the little history. I never thought about the way the Osmonds and Jackson-5 relate to each other, but yeah...they probably did need each other.
Totally agree on #1. I always told my kids that, too. Also, what you spend your time focused on is where your heart is, so you'd better be thinking about good stuff.
Loved Schitt's Creek! I was so sad when it ended.
What a guy, your hubby! LOL I'd be looking for ways to tease about him being the "baby" or pointing out when he shows his age if it were me. :)
Have a great weekend!

I liked the history you shared! Thanks for that.
#7...I feel like I am predictable too. I don't think anything I do is surprising. Loved your answers! Have a nice weekend.

I am not a big TV watcher, either. I've heard good things about Schitt's Creek. I need to see if something we have carries it.