Stranger in the Lake - Book Review 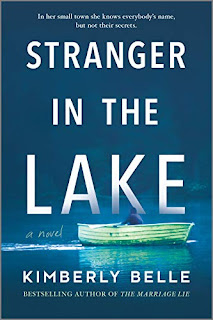 Stranger in the Lake by Kimberly Belle
Publication date: June 9, 2020
Pages: 352 pages
Genre: Thriller, Mystery, Contemporary fiction
Rating: 3.5 out of 5 stars ☆☆☆☆
Strengths: Interesting plot twists
Weaknesses: Not a lot of sense of urgency
Charlotte (previously known as Charlie) has never claimed to be smart or sophisticated. But she married Paul because they were in love, not just because he was rich and made her life a whole lot easier. Paul's first wife had died swimming in the lake outside their house. Some people thought he killed her, but Charlotte recognized that he had truly loved her. Between her poor past and suspicions about his dead wife, they weren't very popular in the small town of Lake Crosby, but that was okay because they had each other.
When Charlotte finds the drowned body of another woman in the same place where Paul's first wife was found years earlier, she's forced to start questioning some unsettling coincidences. She may not have a lot of allies since she moved up from the poor side of the mountain, but now that she's pregnant, she has more than just her own life and well-being to worry about.
Charlotte was a likable character - very down-to-earth, sincere, and scrappy. She knows sometimes she has to do things less than right to survive, but she has a solid line she won't cross in knowing the difference between right and wrong. Even massive amounts of money aren't worth a guilty conscience for her.
I have to admit I did not fully see the ending coming. By about half way through I was starting to narrow it down, but I like being surprised, so I usually just hang on and enjoy the ride. I'd give this book 3.5 out of 5 stars. The plot wasn't obvious to me, and the characters felt realistic in most of their responses, emotions, and reactions. I'd recommend this book for those who enjoy unique thrillers and small-town mysteries.
Thank you to the publisher and Netgalley for my copy of this book. Receiving my Kindle copy for free did not influence my opinion.
Posted by Becki at 4:41 PM
Email ThisBlogThis!Share to TwitterShare to FacebookShare to Pinterest
Labels: Books - 2021

I like the sound of this one. the small town setting sounds great!

I picked this review to read because I like a good mystery. I like the sounds of this one. Kinda reminds me of the movie "Sleeping with the Enemy".