Confessions on the 7:45 - Book Review 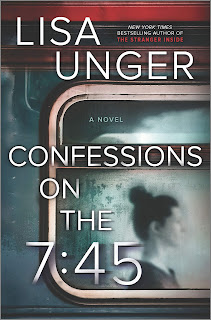 I waited quite a while to borrow this one from the library for my kindle. And now I'm glad I've read it.

Selena knows her husband is having sex with their nanny, when the only reason they have the nanny is so he'll have time to look for a job. Oh, Graham. Ugh. When she suspects them, she moves the nanny-cam, so now she has them recorded. Twice.

After a long day at work, she misses her usual train home and ends up taking the 7:45. A seat opens up next to a woman who looks vaguely familiar, but definitely friendly. It's easy to open up to her, and the women swap secrets. The woman is reassuring that sometimes problems 'just go away.' While it strikes Selena as an odd comment, she goes on with her day and just hopes not to encounter the strange woman again.

Soon enough, Selena confronts her husband, Graham, and then the nanny quits showing up for work. Since most of the nanny's waking hours were spent at their house, Selena and Graham are the first people the police question about the missing woman. How much should Selena reveal of what she knows about Graham and the nanny? And how damaging is it that the woman from the train (Martha, as her later texts remind us) knows their secrets?

While I did suspect a few of the later twists and turns, this book definitely kept me guessing! The chapters alternate between Pearl, an abducted young girl a few years earlier, Anne, a woman somehow involved in the current situations, and Selena. Who exactly is involved in the story, going back years?

I'd give this book 3.5 out of 5 stars. It was definitely a fun psychological thriller, with a splash of vigilante justice (my favorite!). I'd recommend it for those who enjoy conteporary thrillers.

Posted by Becki at 10:48 AM
Email ThisBlogThis!Share to TwitterShare to FacebookShare to Pinterest
Labels: Books - 2021