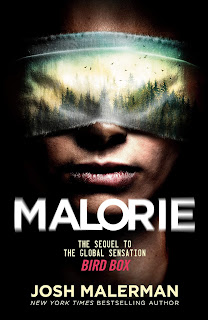 Wow. I'm not usually a very generous reviewer, but this book was a solid 5 stars from me. I read it in a day (and as much as I read, I usually don't finish a book in a day lately). Definitely read and/or watch the first one (this is an excellent second half and conclusion) first. I borrowed this from the library after a wait.

When we left the first story, Malorie, her son Tom and her 'adopted' daughter Olympia were safe at the school for the blind, where creatures couldn't drive the blind residents mad, and the facility was safe against them entering. The Netflix version showed a really nice courtyard where the kids could get some fresh air and sunshine, but not actually 'see' outside the walls. So everyone was safe and happily ever after, right?

The second book opens with a bloody rampage by a blind woman who can only be described as having gone mad. Malorie's first priority is to get her children, and then she knows they'll be on the run for somewhere safe again, after ten years of relative stability in the school for the blind. Now Malorie has the added terror of knowing that if a blind person can be driven mad, the creatures must also be transmitting the madness through touch, not just sight. She requires herself and the kids (now 16-years-old) to wear long pants, long sleeves, and hoods whenever they go outside.

Malorie, Tom, and Olympia move on to a small abandoned camp where the kids can roam a little bit, but they all sleep in the same cabin at Malorie's insistence. It seems they may live forever like this, as long as the creatures are kept at bay. But then a man identifying himself as a census taker arrives at their door.

The maturing of the characters was very interesting. Malorie seemingly keeps the tragedy of watching the world fall apart fresh in her mind. Their safety is paramount to her, and being safe is her goal, at any cost. Tom thinks his mom overreacts, and he wants to live a little. Like his namesake, he thinks maybe they can invent some ways to deal more safely with the creatures without having their whole lives be so sheltered and limited. Olympia is a peacekeeper. She wants everyone to be content, but Tom's sense of adventure and Malorie's drive for safety frequently seem at odds.

I would recommend this psychological thriller set to anyone who thinks they would enjoy it, or this follow-up of course to anyone who liked the movie or the first book the movie was based on. As stated earlier, this book was 5 out of 5 stars for me.

Posted by Becki at 6:51 PM
Email ThisBlogThis!Share to TwitterShare to FacebookShare to Pinterest
Labels: Books - 2021