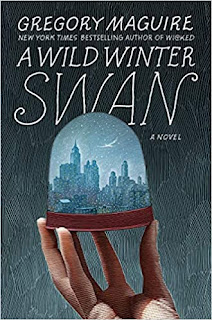 Laura lives with her paternal grandparents in New York City. Her father died before she was born, and then when her brother died a few years after that, her mom became unable to care for her. Her grandparents are old-school Italians who own a grocery store they've built to be more successful over the years.

As they approach Christmas, Laura's grandparents are trying to give the impression of even more success so they can get her grandma's rich brother-in-law to invest in the store and help them keep going. In the midst of all this, Laura gets expelled from her private school for lashing out at the girls who have bullied her for years. To further complicate matters, the day after Laura reads Hans Christian Anderson's story of The Wild Swans to the first graders she reads to after school, a boy with one swan arm lands on the roof outside her window.

Most of the story comes together as Laura tries to help her grandmother and their housekeeper put on an impressive Christmas dinner while hiding and trying to figure out how to help the swan/boy. The story of the immigrants life in the city in the early 1960s is charming and engaging. I enjoyed watching Laura try to meet all the expectations made of her for her behavior and responsibilities, while she tried to write her own story and decide what she really wanted.

Overall, I liked the story more in retrospect than I did as I read it, if that makes sense. While the half swan boy was probably just a fantasy, all of the story was easy to imagine as Laura's real life, and that of her grandparents. I'd give the book 4 out of 5 stories and recommend it as a pleasant, non-traditional Christmas read.

Posted by Becki at 2:27 PM
Email ThisBlogThis!Share to TwitterShare to FacebookShare to Pinterest
Labels: #2020NewReleaseChallenge, Books - 2020

This sounds like an interesting read - thanks for the review!

The swan boy seems interesting - definitely a fanstasy! When a child goes through as much as Laura, they probably spend lots of time dreaming.