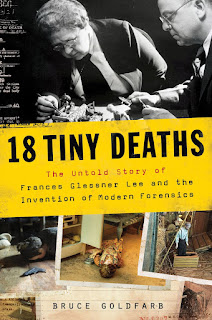 18 Tiny Deaths: The Untold Story of Frances Glessner Lee and the Invention of Modern Forensics by Bruce Goldfarb
Publication date: February 4, 2020
Pages: 336 pages
Genre: Non-fiction
Rating: 3/5 stars ✰✰✰
Strengths: Fascinating subject, incredible detail, and super interesting events occurring at the same time/place
Weaknesses: Too much date/name detail for who was appointed when, or moved where, without really 'getting' how that changed the outcome

When I was about half-way through this book, I was fascinated with the whole subject! But much as our hero in the book - Frances Glessner Lee - discovered, she is the only one who maintained the enthusiasm and passion to change police procedures and death investigations. I felt like as Lee beat everyone else's interest in the project she was championing to death, she did the same thing to my interest in her story. Let me back up a bit.

Frances Glessner Lee was filthy rich, but also smart and bored. She was jealous that her brother and his friends got to go to Harvard (Harvard didn't admit women to study there until 1945, when Lee was 67 years old). Instead, she raised her children and followed her interests with no regard to expenses. And she did some cool stuff, for sure. That was some of the fun part of the book. I don't want to give away the fun side-stories of some of the events that Lee ended up involved in, close to, or influenced by. They were my favorite parts to read.

Eventually, no one else was actively helping Lee further her purpose of getting the U.S. to adopt a Medical Examiner system instead of a coroner system to investigate deaths. She still had money left, though, so she kept buying her way into the story. It wasn't a terrible use of her money, but it didn't feel like a realistic option for most of the rest of the universe, right? I did love the descriptions of how she hosted the police training events at Harvard, and of course her fantastic mini-models of potential crime scenes (which I believe the author is currently in charge of).

Overall, the first half of the book was great, but then it started to feel repetitive and less-productive. While just the beginning of Lee's life story would have gotten a higher rating from me, the whole book deserved 3/5 stars in my opinion.

As an aside, the footnotes did not work on my kindle or in my ARC copy of the book (not sure which caused the problem). I finished reading the actual written book at only 80% of the total document, so there were A LOT of footnotes that may have lent themselves to a better understanding of some of the detail.


Thank you to NetGalley for providing me with a copy of this book to read. The opinions expressed in this review are not influenced by having received the book for free.

Posted by Becki at 4:05 PM
Email ThisBlogThis!Share to TwitterShare to FacebookShare to Pinterest
Labels: #2020NewReleaseChallenge, Books - 2020