Show Us Your Books: Favorites of 2019

The time has come for the Show Us Your Books 2019 Recap. Be sure to visit Jana Says and Life According to Steph to find favorites from all sorts of readers!

Well, I'm still reading and will probably finish a couple more before the new year starts, but I'll go with choosing my top 10 (okay, 12) from the 85 I've finished so far this year.

For the record, a lot of my books are received from the publisher to read for review, or from NetGalley for the same purpose. I'll try to note in the description if these books were received by me for review (even though how I get them doesn't influence my review).

Which brings me to a really fun fact. I LOVE reading for review as it implies a requirement that I just read whatever is in front of me. I've found books I enjoy in nearly all genres. It's somehow easier to read more books (and more 'quickly') when you don't take time to decide what you'll read. I've finally got a spreadsheet going that puts my books in order of publication date and/or when a review needs to be published. When I finish reading a book, I write the review (if necessary) and start the next book on the list. I love my process! 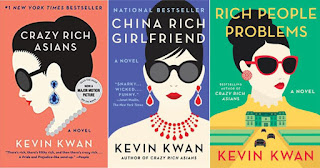 Okay, sort of a cheat here, but I read the whole trilogy this year and really enjoyed it. That being said, I couldn't pick just one for the list. They're similar stories with the same snarky writing. I hope eventually all three are made into movies as well.

I read these as borrowed books for my kindle from the library. The characters were fun, and the stories were sometimes unexpected and always amusing. The movie for the first one had great visuals, and the books all had great aside comments that were sort of book-exclusives and wouldn't translate well into a movie. So I love both. Usually a book or movie is better than the other, but through this series I've been able to enjoy either.

Law and Addiction by Mike Papantonio

I received a complimentary copy of this book to review it on behalf of Books I Think You Should Read. I loved it for its realism. This is an honest look at the opioid epidemic written by an attorney. The characters were engaging, but more importantly the crisis is real.

I've repeated more than once the argument of the attorney who is the main character in the book. He points out that the pharmaceutical industry should see that the demand for these addictive drugs could not have increased to the degree that it has legitimately. People are not having more injuries and needing more pain management. They are becoming addicted to the effects of these drugs, and corrupt doctors are enabling their continued abuse. It's heartbreaking, really.

This was another book I received and reviewed for Books I Think You Should Read. The characters and story in this one were so unique. Without giving away a major plot twist, I'll have to just say that this book had a high-school girl who questioned how much those around her really knew and appreciated her.

I mentioned in my review that this one started a little slow, but the plot definitely picked up and finally culminated in a shocking revelation I never saw coming.

I had wanted to read something by this author for the longest time, but I just waited til something arrived on my desk. See, I think she's sort of a friend-of-a-friend, at least in Facebook land. And as a reader, I'm always excited by that sort of six-degrees fake-relationship. LOL While I did receive one of her other books as a freebie that didn't need to be reviewed, I still haven't read it. This one was a review for Books I Think You Should Read, so I had to good excuse to get right to it.

What a great bonus to be excited for a book for a weird reason, but then really enjoy the book. I like a lot of fantasy books, and this one was unique to me. A realistic story about good vs evil, demons, and shape-shifting gargoyles? Sign me up! Now that I've been reminded of this book, I'll need to go look and see if the next book in this Harbinger series is available yet.

The Darkest Minds by Alexandra Bracken

I love book/movie tie-ins, and if I recall correctly, I think my daughter and I accidentally watched the movie before I read the book. It's a dystopian story of the kids being assigned colors based on their newly developed skill. Then, of course, the adults try to eliminate the dangerous kids before they can take over the world. I know I've read a few similar stories. I borrowed this one from the library on my kindle. What I forgot to do is request the next books in the series! So this list is really coming in handy for me too. Just requested Never Fade, #2 in the series.

The Light of the Fireflies by Paul Pen

This one was on my kindle for a long time. Probably Amazon First Reads or something? I don't know. Apparently last January while I was looking for something to read, this was one of the oldest (published in 2016) sitting on my kindle, so I read it. And really enjoyed the story.

Okay, so maybe 'enjoyed' isn't quite the right word, as it's a rather disturbing story. A boy is living underground, and has no memory of life above ground. The only people he ever sees are his parents, his grandmother, his sister, his mentally-challenged brother, and his sister's baby (who he remembers being born).

Why are they underground? Is there still a safe world above-ground? What do other kids live like? You'll never suspect the real reasons and answers to these questions for the boy.

The Kill Club by Wendy Heard

I just read this one earlier this month for Books I Think You Should Read. I received a copy for my kindle via NetGalley. The premise of this story was completely unexpected for me. In a nutshell, people who have been neglected or un-helped by the system (foster care, law enforcement, whatever) are given the option to have the person who has been abusing them eliminated - all they have to do is kill someone else as assigned.

So with an idea I found highly engaging, the author added a main character who was someone I really wanted things to go well for. And the best news yet? This one seems set up for a follow-up with the main character. Hope to see you again, Jazz!

This was another dystopian fiction I borrowed from the library on my kindle.
In this one, females (both children and adults) are limited in the number of words they can utter each day. The moral choices come in when a scientist (who happens to be a woman) is offered the chance to speak as much as she wants, as long as she's helping the government which is still suppressing her daughter and all the other women.

Her first thought is to offer no help to the enemy, until she realizes that it will be much easier to fight for herself and her family when she can talk again. There was also a big surprise at the end of this one. You'll have to read it to find out!

I think this was another book on my kindle. I need to start keeping better track of these Amazon First Reads - I download them each month and then just keep them on a list til I'm caught up on my review reading. I think I have more than a dozen just sitting there ready to read now.

Anyway, this was another great fantasy book about people with magic (as a gift, or who study it to advance their skills), and trolls as a species that we co-exist with. It was a long book, but the level of set-up was necessary to the development of all this stuff I didn't know anything about before this book. This is another amazing book that I hope has more to follow it.

When a Toy Dog Became a Wolf and the Moon Broke Curfew... a memoir by Hendrika de Vries

The title is definitely the worst, but the book is one of the best I read this year. I read this touching WWII memoir for Books I Think You Should Read and received a copy of it for that purpose.

I think what made the biggest impression of this book is knowing from the notes at the end that the author was just a few blocks from Anne Frank. Even those who weren't hiding to try and save their lives were not living the life they had before the war. Nazi occupation overshadowed everything for everyone.

As I stated in my review, I'd love to learn more about the author's life after the war.

Where the Crawdads Sing by Delia Owens

You can find lots of reviews (most of them favorable) of this book. I was lucky enough to borrow a copy of the book from a friend at school. It's also been compared to Educated, but I haven't read that one yet (I'm on the waiting list through the library..).

The story was great and inspiring, but honestly it was the huge reveal at the end that really bumped this one up on my favorites list. The uplifting survival of the human spirit without support, just learning from nature and thriving - definitely a reassuring affirmation of the resilience of children, and people in general. But I'll admit I read that part near the end over and over.

Where the Forest Meets the Stars by Glendy Vanderah

I know I said there was no order to this list, but somehow I still saved the best for last. This is one of my favorite books of all time, and I'm so glad I received it to review for Books I Think You Should Read.

This contemporary fiction story follows a young girl claiming to be an alien and her connection with a field scientist dealing with her own issues. What happens when someone completely dedicated to measurable facts is faced with magic that can't be proven?

Just remembering this book and looking at other reviews since mine make me want to read it again. A lot of my books get donated and move into general circulation, but this one has been loaned out with the condition that it comes back to me.

Posted by Becki at 3:26 PM
Email ThisBlogThis!Share to TwitterShare to FacebookShare to Pinterest
Labels: Books - 2019, Show Us Your Books

I have The Kill Club and need to read it soon!

I'm so curious about The Kill Club!

I might check out The Kill Club! What an interesting premise.

I have never heard of the Kill Club but it sounds right up my alley. Adding it to my TBR. Crawdad's has been on my TBR forever (okay, it just feels like forever) but I keep putting it off because it always seemed a bit heavy in nature. I will get to it and maybe sooner than I expected, thanks to your review.

Vox sounds really good, and I've seen it on a few lists. Must check it out!