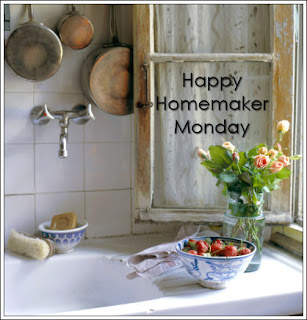 Happy Monday! I'm joining up with Diary of a Stay at Home Mom this week for Happy Homemaker Monday.

This week is sort of our week off, if you will. Last week Jack had On Your Mark Youth Fitness camp, and next week Maggie has Young Americans camp. So this week started with glorious nothing, but we now have lunch plans on Tuesday and Wednesday, and meeting friends at the zoo on Thursday. Today, though? I'm not going anywhere!

The weather::
I've been watching the forecast trying to plan our zoo trip for Thursday. Last week they were calling for rain, but now it looks like the thunderstorms are just today. And I honestly like watching  thunderstorms, so one is fine with me.

Breakfast::
Maggie had a friend sleep over last night, so I made cinnamon rolls for the kids this morning. Yum!

Right now::
I just finished writing my review for At the Narrow Waist of the World.  I'm getting ready to review How to Read a Book once I'm done with this post. I'm also hoping to work on a stitching project.

On my reading pile::
Starting Off the Grid next. It published on July 2. Next up will be a memoir I received that will officially publish in August. And I keep itching to order The Handmaid's Tale graphic novel. One of these days it will end up in my Amazon cart. Hahaha....


Movies/Shows/TV::
Hubs and I are working through the final season of Orange is the New Black. I also read that the Deadwood movie has released. And of course there will be a new episode of The Handmaid's Tale this week.

On the menu this week::
Monday - Taco Salad
Tuesday - Chicken with stuffing
Wednesday - Spaghetti or Hamburger Helper
Wednesday is also payday, so I'll do some grocery shopping and menu plan for the rest of the week and next week. Sort of. Hubby and Maggie are headed to a boat race, so no cooking for me and Jack this weekend. :D

On my to-do list::
The cleaning people come on Wednesday, so I'll make sure things are straightened up by then.
Also need to strip the beds, wash the sheets, make the beds..
I'm waiting to hear if we'll be hosting two of the college students with the Young Americans program for next week. If so, I'll have a bit more prep for that. 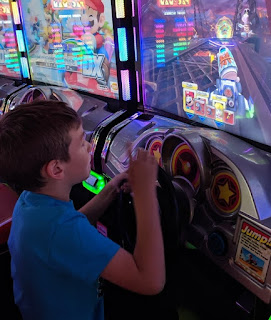 Last night Maggie had a friend over, and we all headed to the local Round 1. The girls and hubby played a game of bowling, and Jack and I spent an hour in the arcade. One of his favorites is Mario Kart.


What I'm wearing today::
Jeans and a t-shirt. Skipped the shower this morning so I could get right to making cinnamon rolls for the short people.

One of my simple pleasures::
The kids and I made pineapple upside down cupcakes over the weekend. I haven't seen anyone else eat any of them, so I've got my work cut out for me! I think they're delicious, so I don't want them to go to waste. ;)

Posted by Becki at 11:06 AM
Email ThisBlogThis!Share to TwitterShare to FacebookShare to Pinterest
Labels: Happy Homemaker Monday

Um, if you need someone to eat those pineapple upside down cupcakes ... I take deliveries at work. Haha! That sounds tasty.

And I had no idea there is a Handmaid's Tale graphic novel ... that's awesome.

We love upside down pineapple cake. I never thought about making cupcakes that way. I'll have to give it a try. Have a great week!

Mmmm pineapple upside down cupcakes! I am heading over to the other side of the state!! I have to watch last weeks episode of the Handmaids Tale yet.... That show just disturbs me, but I can't stop watching it! Have a great MOnday!

Pineapple upside down cupcakes! Yum! I have a feeling I'd be the only one really eating those around here as well though. Hope the weather cooperates for your zoo trip tomorrow. Have a wonderful rest of your week!

Oh my, you had me at upside down pineapple! Sounds like a busy, but fun week - hope it was GREAT!