I finished reading four books in November. Here's the Amazon summary of each, along with a quick splash of my thoughts.

Beautiful Exiles by Meg Waite Clayton must have been one of my Prime Amazon picks. It's a historical/biographical fiction about the fascinating Martha Gellhorn. I admit I was previously completely unfamiliar with the story of Ernest Hemingway's third wife, and she was quite interesting in her own right. Overall, I'd give this one 3 out of 5 stars. It dragged a little in parts, and I wished she would do more to stand up for herself - which is a wish way more suited to a fiction read than this. LOL

"Key West, 1936. Headstrong, accomplished journalist Martha Gellhorn is confident with words but less so with men when she meets disheveled literary titan Ernest Hemingway in a dive bar. Their friendship—forged over writing, talk, and family dinners—flourishes into something undeniable in Madrid while they’re covering the Spanish Civil War.Martha reveres him. The very married Hemingway is taken with Martha—her beauty, her ambition, and her fearless spirit. And as Hemingway tells her, the most powerful love stories are always set against the fury of war. The risks are so much greater. They’re made for each other.
With their romance unfolding as they travel the globe, Martha establishes herself as one of the world’s foremost war correspondents, and Hemingway begins the novel that will win him the Nobel Prize for Literature. Beautiful Exiles is a stirring story of lovers and rivals, of the breathless attraction to power and fame, and of one woman—ahead of her time—claiming her own identity from the wreckage of love."

The Heart Goes Last by Margaret Atwood was recommended to me by a friend who knew I've loved everything I've read by Margaret Atwood so far. This was definitely another great book by Atwood to add to my list to recommend. The characters and situations are always presented so believeably that you can forget it's fiction when you're halfway through. I finished reading the book and wondered how the main characters are doing now. I'd give it 4.5 out of 5 stars. I don't know that I'd read it again, since I know all the twists and turns now.


"Stan and Charmaine are a married couple trying to stay afloat in the midst of an economic and social collapse. Job loss has forced them to live in their car, leaving them vulnerable to roving gangs. They desperately need to turn their situation around—and fast. The Positron Project in the town of Consilience seems to be the answer to their prayers. No one is unemployed and everyone gets a comfortable, clean house to live in . . . for six months out of the year. On alternating months, residents of Consilience must leave their homes and function as inmates in the Positron prison system. Once their month of service in the prison is completed, they can return to their "civilian" homes.     At first, this doesn't seem like too much of a sacrifice to make in order to have a roof over one's head and food to eat. But when Charmaine becomes romantically involved with the man who lives in their house during the months when she and Stan are in the prison, a series of troubling events unfolds, putting Stan's life in danger. With each passing day, Positron looks less like a prayer answered and more like a chilling prophecy fulfilled."

Lincoln's Spymaster by Samantha Seiple is the first book I've read for our middle school battle of the books so far this year. It was a non-fiction book about Allan Pinkerton and his founding of the first private investigation business. I'd only give it 2 out of 5 stars. It read like a history book. But if history is your jam, there were lots of good facts, as well as some great photos of historical figures and places.


Pinkerton was just a poor immigrant barrel-maker in Illinois when he stumbled across his first case just miles from his home. His reputation grew and people began approaching Pinkerton with their cases, leading him to open the first-of-its-kind private detective agency. Pinkerton assembled a team of undercover agents, and together they caught train robbers, counterfeiters, and other outlaws. Soon these outlaws, including Jesse James, became their nemeses. Danger didn't stop the agency! The team even uncovered and stopped an assassination plot against president-elect Abraham Lincoln! Seeing firsthand the value of Pinkerton's service, Lincoln funded Pinkerton's spy network, a precursor to the Secret Service. Allan Pinkerton is known as the father of modern day espionage, and this is the first book for young adults to tell his story!" 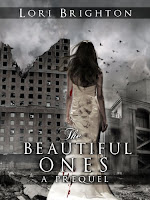 The fourth book I read in November was probably an Amazon Prime first-reads book too, since I found it on my kindle. It was actually closer to a short story, but I wish it had been longer and I may check out the books that come after this prequel.

The Beautiful Ones by Lori Brighton was an interesting twist on a young-adult vampire story. It was a quick read, and definitely enticed me to remember that I'd like to hear more about the story. I'd give it 4 out of 5 stars.


"Some say we’re special, and that’s why we’re kept in seclusion. Beyond those walls evil lurks and innocent prey would be lost in minutes. Gone. Destroyed. Forgotten. Others say the opposite: we’re locked away because there’s something wrong with us. If we roamed the outside world, we might taint the beautiful ones. A species so pure, that to merely be in their presence is a gift. As for my beliefs…I’m not sure. But I do know one thing: neither of those reasons explains why it is that they come for us only after we’ve passed the age of sixteen. Whether we want to go or not, we’re taken through those iron gates. Escorted away from the only home we’ve ever known, escorted to our destiny—whatever that destiny may be—never to be seen again. "

So what good books have you read lately? I've already finished two in December - one YA for the battle, and one from my TBR list on my kindle... Check out what I have to say about them in early January.
Posted by Becki at 6:59 PM
Email ThisBlogThis!Share to TwitterShare to FacebookShare to Pinterest
Labels: Books - 2018

Camino Island by John Grisham was a good read. Hubby got it for Christmas and said I might like it. He was right.

Congrats on finishing 4 books! I liked The Heart Goes Last, but I was a little creeped out by it because the main characters have the same names as my grandparents.

Aj @ Read All The Things!