A Wrinkle in Time - My Review 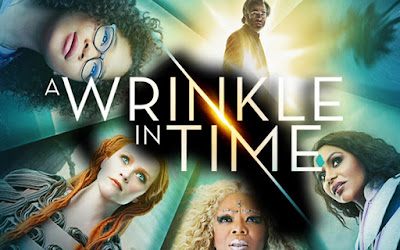 I loved this movie!! I'm ready to see it again, because it was just so fun to immerse myself in. AND it was totally worth seeing on the big screen. The costumes were my favorite part, with the relationship between Meg and nice Charles Wallace being a close second. I also loved Mrs. Whatsit's (Reese Witherspoon) sweet but snarky character.

While I definitely read the book, we're reaching back probably more than 30 years for that, so I really can't compare it to the movie. I do plan to read it again, now that I'm so enamored with the movie. I've heard that the message wasn't as deep in the movie, but I was totally fine with how it was presented simply, for a two-hour audience.

The flying scene after they first traveled away from their everyday world was hugely, enormously reminiscent of the banshee flying in Avatar. This was probably more annoying for me and my daughter because we just recently watched the original Avatar in preparation for the ride at Disneyworld. If it had been 10 years between watching Avatar and watching A Wrinkle in Time as it was for those making it, maybe it wouldn't have been so markedly similar.

I'm not sure that this would have been as good a movie for my six-year-old to watch, or if I'd been distracted by my six-year-old while watching it. My ten-year-old daughter and I saw this for a girls' night out, and we both loved it.
Posted by Becki at 7:54 PM
Email ThisBlogThis!Share to TwitterShare to FacebookShare to Pinterest
Labels: Big Screen - 2018

I really liked this one as well, but I haven't read the book in like 10-15 years ... if I had recently read the book, I am not sure that I would have liked it as much, lol, as I had heard that they changed a lot from the book to the movie. I'd give it like 3.5/5 stars.

I was thinking of reading this book, and then watching the movie. I've heard good things about the book, and really mixed reviews of the movie.

I heard this got mixed reviews. Are there 'scary' parts? Would love to watch with my toddler when it comes to Netflix.

Haven't seen this film but heard good reviews about it. looks great based on your mini review. Might watch it soon!