Twas a Girls' Night Before Christmas: The Musical - Review and Info 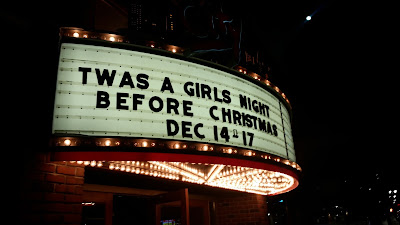 Apparently, I left off the end of the title when I invited hubby to see this show with me. You know, the part that says, 'The Musical.' I was only conserving words, so I felt a little bad when I saw the look of horror on his face when we picked up our tickets at will-call. LOL

The show ended up being quite cute, and I really liked the cozy City Theater. Detroit is a great city to be near, with lots to see and do. We grabbed dinner beforehand, then took the People Mover over to the Grand Circus Park station to walk the last few blocks to the theater.

Twas a Girls' Night Before Christmas was a show about four close friends, well, five, if you count the one who died and narrates for us as sort of an in-between angel. She has to do a good deed to get her real wings. The friends are hanging out to catch up before the holidays. Since they're all adults with the expected busy lives, they don't get to spend time with each other as often as they'd like. The angel gives us a bit of history, and the friends bring us up to date with the new events of the last few months. Don't leave at intermission, though, as the angel has a big surprise ending in store!

While there's an invite at the beginning for lots of audience participation, the crowd at our showing didn't do much (although I was admittedly singing at my seat and don't worry, Gloria Gaynor fan off to the left - we all saw you! LOL). The songs that the girls broke into at the 'club' where they were hanging out were easily recognizable, and their dance moves were great! It was definitely a fun performance. 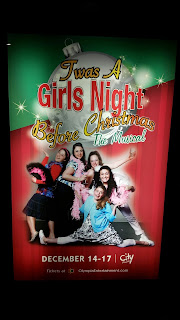 I received tickets to the show for promoting, but all opinions are my own.
Posted by Becki at 2:17 PM
Email ThisBlogThis!Share to TwitterShare to FacebookShare to Pinterest