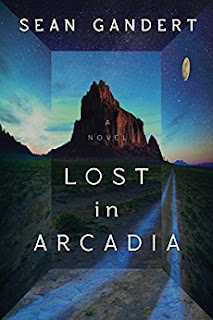 This was admittedly a little slower read than most of the dystopian novels I love so much. There were several main characters - which I love - but it felt like there was less 'activity' surrounding them. So I'd get bored and set it aside instead of pushing through to more of my favorite characters' stories. Lost in Arcadia by Sean Gandert ended up satisfying the 16th category on my reading challenge list - a book that's published in 2017. It was one of my Kindle first-read books for July (Amazon Prime members get a free Kindle each month, and get to pick one of four or five books around the first of each month). I've liked several of the books picked this way, and this one was no exception.

The book centered heavily around one family in New Mexico. The father had invented a giant role-playing computer game (sorry - probably the wrong lingo, as these types of games aren't really my thing), and then he disappeared for years. The mother persevered in raising three children - one who was living with a long-term boyfriend a few hours away, one who was also working on computer games, and one who was a teenager still at home. Another character who overlapped with two of the children was a girl who had a tragic accident while a student at the youngest's school, and then ended up interacting with the computer games person, primarily online.

Outside of the characters was a lot of world-view and political stuff that influenced their lives in ways we could just imagine (there's that dystopian spin ;) ). The character's choices were sometimes hard to imagine, since the world they were living in is not the same as our current world in many ways.

Overall, I'd say it was a decent book. Without giving too much away, the fruit angle was my favorite. LOL It was a slower read than I usually pick up, and it did take some determination to actually finish it up. That being said, I think the author could have some potential, if he reads over his reviews and learns from them. Given the genre, he definitely did need a lot of the detailed descriptions, but in most cases he went a bit further than needed. I wouldn't recommend this to someone as a first dystopian novel, but as someone who already enjoys them, I was also able to enjoy this book.
Posted by Becki at 12:00 PM
Email ThisBlogThis!Share to TwitterShare to FacebookShare to Pinterest
Labels: 2017 Reading Challenge

I'm pinning this to read later - it sounds pretty interesting. Thanks for the review!

This sounds like a good one to read. Thanks for giving your review about it.

I've been trying to do more leisure reading! I do a lot of reading in my Miracle Morning routine and in the work book club I started but need to get some fun reads in there too. Thanks for the recommendation.

I think I need to read another dystopian novel before the year ends. :-) These books may describe bleak and grim futures but these also talk about so much hope in the collective strength of humanity. Thanks for sharing your review.