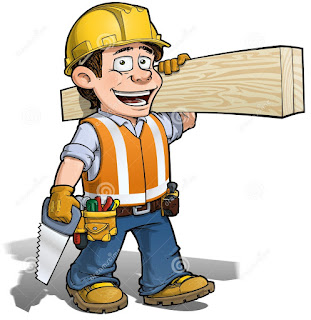 I want to tell you a good news story. I really do. But in this case, I don't have one.

See, we've lived in our house for almost 5 1/2 years. When we moved in, the deck was a little rough. We opted against refinishing it, as we eventually want a bigger deck. So we admittedly let it go.

Then a few years ago (two and three years ago, actually), we had terrible, awful, atrocious winters. They were incredibly snowy and cold. You probably remember! Well, here, that also meant frost heaves. I'm sure there's a fancy science-y explanation, but it's really cold, and you hear a creepy popping noise, and things are moving underground.

When the things moved underground, they moved our deck supports. Remember, on the deck we didn't really want anyway. But, when they moved, they changed the attachment of the deck to the house, and water started draining off the unlevel deck into a wall around the basement walk-out, and the (luckily, tiled) basement floor.

Oh, and we're still at the happy part of the story. LOL

Now, we want to fix it all back up so we can get the deck we really want next spring. The old deck is gone. Don't worry about that.

What we want now is someone, preferably licensed and insured, to come fix the icky walk-out with the wood rot. Maybe we can even get a nicer doorwall while we're at it. But first things first. Someone who really knows what they're doing to either repair or replace a wall. A sort of important wall, that holds up two more floors above it.

Maybe you've had this problem too - we've called I think five companies so far for quotes. The first two were weeks (maybe even months?) ago. One came out, but never followed up with any quote information, even when hubby called and asked again. The other? Never even showed up to see what we wanted done.

Yesterday I called two more. One (this sort of makes me go huh), asked me to take down a different number and call him again today. I did. He says he'll call me back again to make an appointment to come look. The other one I left a voicemail and haven't heard back.
And then today I called one I saw in a newspaper flyer. She took down my info and said someone 'in the field' will call me back.
I'm not holding my breath anymore.

Is there a YouTube video on rebuilding a wall of your house? Do I need special tools or can I get it done with my mini craft stapler and some washi tape?

Is the economy so much better that people really don't need to schedule jobs? I really don't get it.
Posted by Becki at 3:02 PM
Email ThisBlogThis!Share to TwitterShare to FacebookShare to Pinterest

I've heard that other people have trouble getting companies to come out! I don't get that. It hurts their reputation. I'm so sorry about your situation.

Oh Becki! How awful! I totally agree that there are some crappy people in the trades these days. We just finished our basement and had to hire out a few things and getting people to call me back was SO annoying, not to mention how late they would show up, etc. So sorry you are going through this...I wish I had a contact who could help -- sounds so frustrating!

I feel for you. We've been in our new house for eight months and have had six floods. All for different reasons. I'm ready to work on the rest of the house. That stinks!

Hope everything gets fixed pretty soon or before the bad weather takes over. !

Sorry that it's taking this long!