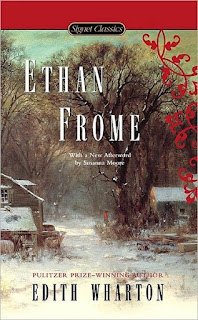 For my 'book written more than 100 years ago,' I chose this short story by Edith Wharton. Ethan Frome was published in 1911.

While I have to admit I picked this one because it was a short story, and I wanted something fast for a change, this book really lingers with me. I don't want to spoil it, but it's the ultimate 'careful what you wish for,' story.

The whole story is told 24 years after it occurs, as a flashback while the preface narrator tries to learn more about a resident in the town of Starkfield, Massachusetts, where he's staying for a year. Ethan Frome is more than meets the eye.

I was surprised to learn that this was also made into a movie in 1993. The reviews aren't the best, but I'd like to see it just to compare it to the story in my mind's eye. ;)


Five more days til I draw for the four-pack of Marvel Universe Live tickets! Your chance to enter is here: http://www.sweetlybsquared.com/2015/09/marvel-universe-live-ticket-giveaway.html

Good luck!
Posted by Becki at 10:31 AM
Email ThisBlogThis!Share to TwitterShare to FacebookShare to Pinterest
Labels: 2015 Reading Challenge

Sounds like an interesting read. I like short stories, like them to be short and sweet. They seem to be the most interesting books to read, at least to me.

Sounds interesting. I've only read a few short story books. It's nice to be able to put it down for a while and then pick it up to to something fresh.

I love watching a movie after reading the book. I love knowing if the characters in my head are close to what someone else sees.