This is totally not going as quickly as I originally planned. See, there's 50 different books/categories/whatever on the list. So that's really close to one per week.
I just finished book number five. It is wayyy past the fifth week of 2015. Oh well. 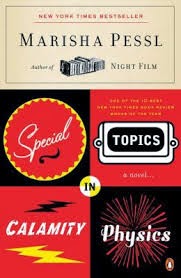 The fifth book I've finished this year actually satisfies the sixth listed book - a book written by someone younger than 30.

I just finished (okay, actually late last night/early this morning) Special Topics in Calamity Physics by Marisha Pessl. She was born (very near where I now live!) in October of 1977, and the book was published in 2006, so she was probably only 29 by the time it was printed and available.

It was a long book, and the beginning was a bit slow, but I finally finished it by staying up way too late the last couple of nights because I HAD to get to the end and see what happened. And there was no way three nights ago I could have guessed at the plot twists as I approached the end of the book. Wow!

In the beginning, I was enjoying just another coming of age novel, but by the end, I wish I'd known more about political science to make it an easier read. It was definitely fascinating.

Posted by Becki at 10:51 PM
Email ThisBlogThis!Share to TwitterShare to FacebookShare to Pinterest
Labels: 2015 Reading Challenge

Library or book? My library here is very small. I need one for that catagory.