I started reading a book about the history of the circus (The Ordinary Acrobat by Duncan Wall) a few months ago. It was great, but I was too easily distracted. And I think it was a new book with a shorter circulation time (excuses, I know).

Just in the first few chapters, the author talked about how the circus was essentially 're-invented' in Europe rather recently. But part of the circus that hasn't changed much is how all of those animals and performers are transported between all the venues. Check out these facts from Ringling Bros and Barnum & Bailey about the Dragons show touring now: 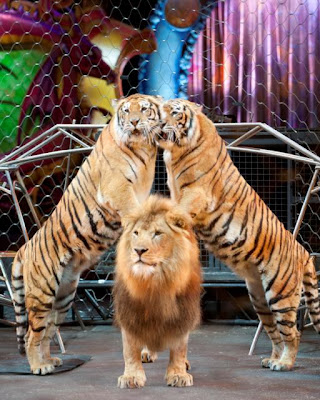 If I were going to join the circus, I discovered I would be 'particularly predisposed to being an attentive and artistic animal trainer!' What would the best job for you be with the circus? Find out here with Ringling's Aptitude Test.

Not ready to join the circus just yet? Come out and watch it for a super fun evening! If you're near the metro Detroit area, Ringling Bros and Barnum & Bailey are presenting DRAGONS at the Palace of Auburn Hills, November 13 - 17, 2013. You can use promo code 18MOM for $18 flat rate tickets (Good on all performances. Not Valid on FR, CC or VIP seats and must be purchased in groups of 4). Visit Ticketmaster to order your tickets now!

Posted by Becki at 12:16 AM
Email ThisBlogThis!Share to TwitterShare to FacebookShare to Pinterest

I enjoy the circus, but I don't think I'd want to join it lol Just finished reading a book about a circus too. Not the same one though lol