We had a great time again at Monster Jam! Even Jack sat still when the trucks were actually doing something (he wasn't so much there for the banter after each freestyle run). Maggie was excited to take lots of pictures, but we haven't downloaded them from her camera yet.

The races in the first half were fine - like I said earlier, Jack liked listening to the roaring engines. After intermission, though, was when it got really fun to watch. 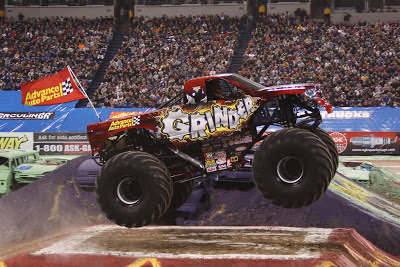 The freestyle portion is always the best. My favorite this year was Monster Mutt. He was in first place until the run by Son Uva Digger. In Monster Mutt's run, first he lost his hood (but not his tongue), and then the whole body fell off soon after that. And this was all after a complete roll over. Exciting stuff!

I'm so glad the Advance Auto Parts Monster Jam comes to Detroit now twice a year! It's a blast every time :)
Posted by Becki at 2:57 PM
Email ThisBlogThis!Share to TwitterShare to FacebookShare to Pinterest