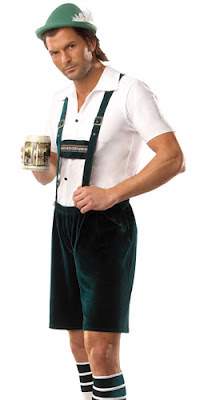 Yay!! My favorite holiday is right around the corner. Who doesn't love dressing up however they want for at least one night a year (depending on your party schedule..) with no excuses?!

Hubby says men love Halloween because so many women dress like sluts since it's finally 'acceptable.' Who knows? I think it's fun to play up my physical attributes while I've still got em. Maybe I'll look into a few sexy costumes. I'm rather liking the saloon girl, if I can find a fitting male costume to complement it. Hubby and I have been watching enough Deadwood that I think it would be a fun night out pretending we're some of those characters :)

It looks like hubby's explanation for Halloween may be holding true. EdenFantasys has six pages of costumes for women, and only one page for the guys. I don't see a guy's costume to match my favorite lady's so far.

Since we both love Halloween, we usually try to have a 'set' of costumes. Last year we were a German couple - hubby had something pretty similar to the picture, and I was a beer girl. Another year I was a ladybug and he was a bug catcher. Once when we hadn't really planned much in advance, we wore our Renaissance faire costumes. I've worn the wench costume without him as well to rave reviews.

One costume we saw friends in last year sort of surprised me. She was Brittney and he was K-Fed. They had lots of fun with it, but she somehow totally pulled off the innocent look Brittney sometimes tries for a lot better than Brittney ever accomplished it. Maybe it's because I know she could never be as...morally questionable... as Brittney ;)

Of course as our family has grown, the cute whole family costumes have caught my eye, but there's something liberating about wearing something your kids shouldn't recognize you in when you go out for date night at least once a year.

What are some of your favorite sexy Halloween costumes?


I'm receiving a gift card from edenfantasys for my objective post. Yay for honest disclosure :).
Posted by Becki at 12:27 PM
Email ThisBlogThis!Share to TwitterShare to FacebookShare to Pinterest
Labels: Sexy Saturday