So Googling led me to Meme-Aholics, which brought me to From This Side of the Pond, who hosts Wednesday hodgepodge. So here goes my first post for a new meme!

1. Summer officially rolls in with the Hodgepodge, for those of us in the Northern hemisphere anyway. What song says summer 2012 to you?
I have to go with the Soup Dragons' Divine Thing. Probably because I listened to the Hotwired cd a lot one memorable summer.

2. What is the quintessential summer food?
Corn on the cob :)

3. I've spent a lot of time traipsing up and down the NJ turnpike in recent weeks. Did you know the rest stops on the turnpike are named after people who lived or worked in NJ? Clara Barton, Walt Whitman, James Fenimore Cooper, Molly Pitcher, Joyce Kilmer, Thomas Edison, and Grover Cleveland just to name a few. Of those I listed who would you most like to have known and why?
Huh. I hope I don't hurt anyone's feelings by saying that none of them really jump out at me...

4. At what age did you move out of your parent's house and what prompted the move?
Ugh. I commuted to college, so I didn't move out until I got married. Unfortunately, I think that's why I got married - I wasn't sure how to just 'move out.' That marriage lasted a whopping eight months, and after less than six months back at my parents' house, I got a place of my very own to move to.

5. What's more satisfying to you-saving time or saving money?
Money. Any time I save gets eaten too fast by tasks I never have time for ;) 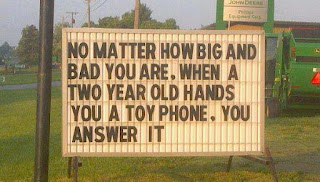 7. This last question comes to you courtesy of Kathy at Reflections...are you taking a vacation or staycation this summer? If so where are will you go? If a staycation is on the calendar have you made any special plans to fill the time?
Nothing is actually on the calendar so far....

Love you answer about kids bringing out the good in people, and I love your graphic. Welcome to Hodgepodge! :)

Welcome to the Hodgepodge! I love that sign : ) Kids can bring out the good in people.

Have a great weekend!