What's Important to YOU? 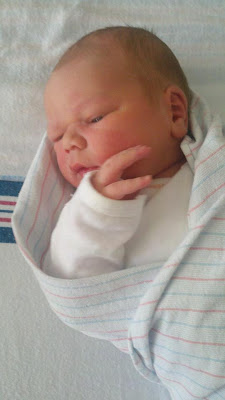 What totally got me was Maggie's first gut response. As much as I know she likes the president, I thought she'd want to try to go see him (and I have no idea how I would try that!). Instead? My adorable girl said, "He hasn't met Jack yet!" I asked her if she thought he should stop by to meet him, and of course she was supportive of that idea ;) My daughter didn't want to meet the president, or even to have her little brother meet the president, but she definitely thought the president should make a point of meeting her very important little brother!

(And yes, that's the little brother, Jack, in the picture ;) )
Posted by Becki at 1:59 PM
Email ThisBlogThis!Share to TwitterShare to FacebookShare to Pinterest

he is adorable!! what a hunk of burning love already lol