The roads were pretty icky earlier today when we headed out to Maggie's class a little after noon. I absolutely hate driving when the roads are icky, but luckily Maggie's class is only a mile or so away.

I was mildly annoyed when one road had an extra right lane for people turning in to the industrial businesses and an SUV decided they HAD to get around me. The driver started trying to accelerate past me when a light turned green, so I backed off and let her instead of screwing around on the slush covered road. Just a few driveways further, she turned left into the same place we were going. Of course I started guessing whose mom it might be.

(As a total aside, I had to wait for more traffic before I could complete the left turn, but once I got into the lot she was blocking my way by still trying to fit her SUV into a spot - go forward, back up, go forward, back up - you get the picture.) 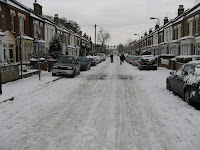 We ended up walking into the building at the same time (good thing you got in front of me on the road, yotch!). Once we were all in the classroom, the conversation inevitably turned to the weather and the lousy roads that had started yesterday. She actually had the gall to stand there and complain about someone cutting her off yesterday. She had several stories about people who were in too much of a hurry for road conditions. Huh? I bit my tongue, but it really got me wondering - does she even realize what a rude driver she was being, to so promptly say the exact same thing about someone else? Ugh.
Posted by Becki at 4:11 PM
Email ThisBlogThis!Share to TwitterShare to FacebookShare to Pinterest

Oh you are so much better then me. I would of said something to her on the way into the building. For goodness sake she had a little one in her car too. No I really don't think people have any idea how rude they are. People today only think of themself and their little world. No one else. Very sad.

She was clueless. Usually they cut you off because they didn't even see you. Scary!