I'm so brave! I just called someone I almost chickened out on. Last time I called shortly afternoon and she snapped at me that she was trying to sleep. I apologized and made a note to call her later in the day next time. Today someone said she was not available, but when I asked for a better time to call, they suggested a weekend. She originally contacted the company saying she was interested in more information - I'd love to give her the information and some free chocolate!

Chocolate syrup was used for blood in the famous 45 second shower scene in Alfred Hitchcock's movie, Psycho, which actually took 7 days to shoot.

Fifteen days til I leave for Vegas!! Yay!! No one has a more fun job than chocolate!!

I want to put together a big old mailing for our January specials this evening, but I also want to download the first episode of season four of Big Love. I found out I can get it through iTunes! I think this is the first time I've been happy to have iTunes. There are so many spoilers out already about Big Love, as they get ready to televise season five. We don't have HBO, so I won't be able to watch season five yet, but at least I won't be learning something to ruin another surprise in season four every day anymore... 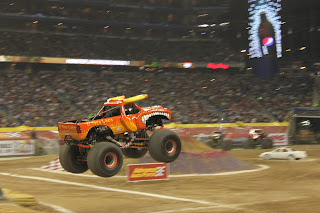 We had a great time at the Monster Truck Jam last weekend. It was a lot more fun than I expected. Our seats were awesome - we were in like the seventh row! That made it much dirtier than I expected. ;) Maggie never sits back in her seat, and you could see the dirt building on the back part of her chair - ew!!
Maggie like the Monster Mutt truck because it had ears and a tail (although it lost its tail after the first run). She didn't seem to respond to a lot of the event while we were there, but I think she was just storing it up - she kept talking about it the next few days.
Posted by Becki at 4:31 PM
Email ThisBlogThis!Share to TwitterShare to FacebookShare to Pinterest
Labels: Random Tuesday Thoughts

Those events have so much going on that it's hard for me to concentrate on any one thing before something else grabs my attention.

We were thinking of taking Joel, but didn't know if he would be interested. We found out too late that he would have been! He got really excited during the commercials. Maybe next time....Was it really loud?