I forget who first told me, but it's supposed to be good luck for the first words you utter on the first day of the month to be, "Rabbit, rabbit."

As my Facebook profile has come to prove, it's too easy for me to pass up! And I feel like a pretty lucky person, so maybe it's working ;)

The exact origin of the superstition is unknown, though it has appeared in print at least as early as 1922:

However, some reports place its origins even earlier, into the 1800s. Today it has spread to most of the English-speaking countries of the world, although like all folklore, determining its exact area of distribution is difficult. This superstition is related to the broader belief in the rabbit or hare being a "lucky" animal, as exhibited in the practice of carrying a rabbit's foot for luck. Some have also believed it is representing a jumping into the future and moving ahead with life and happiness.

No matter how you look at it, I'm celebrating the first of November with this Rabbit, rabbit post, and a picture of a bunny with a pancake on his head. Enjoy :) 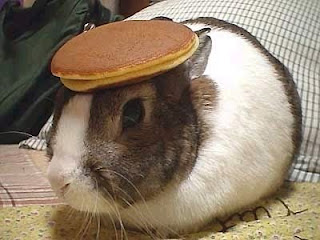 Posted by Becki at 7:31 PM
Email ThisBlogThis!Share to TwitterShare to FacebookShare to Pinterest