I read a lot of Facebook updates and talk to plenty of people who have their whole weekly schedule planned around their TV viewing goals. I don't ever remember watching many shows at once. I think if I ever did, it stopped when I gave up TV one year for Lent while I was in high school (and no, I was never Catholic). After giving TV up for that long, I just never was really into it after that.

Don't get me wrong - there have been a few shows that I haven't missed. My little guilty pleasures, but usually only one (okay, maybe two) at a time. Right now it's 24. Don't even try to contact me on Monday nights between 9 and 10 PM. I mean it. I almost considered rescheduling our honeymoon because I was missing the season finale on a cruise ship. It's not just a TV show for me - Jack Bauer is counting on my help! 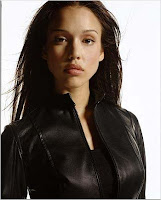 I had a similar passion years ago for Dark Angel with Jessica Alba. Anyone remember that one? If you're nearby and don't remember - don't worry - I have both seasons on DVD. It was about life after the giant electromagnetic pulse that wiped out most of our data-centered lives as we know them. And the main character was a genetically engineered (and very attractive) chick who had been on human growth hormone or whatever to make her 'super human.' The second season had some other un-humans who had been grown in a lab as well. I loved it!

The other shows I loved that come to mind were even...well, worse. Rock of Love and Daisy of Love. Yeah, I could even admit at the time that they were never quality entertainment, but they sure were fun to watch for a while. My problem now is that since they were 'reality' television, there's no point in watching re-runs, since the eliminations are already finished....

What shows have you loved and now miss? Or what's your favorite now, and why should I try and watch it?
Posted by Becki at 10:01 PM
Email ThisBlogThis!Share to TwitterShare to FacebookShare to Pinterest

The only 4 shows that I absolutely can't miss are Desperate Houswives, Grey's Anatomy, Private Practice and Army Wives. And even then I am 3 weeks behind on the first 3 shows I mentioned. I should hurry and catch up on those too since the new Season of Army Wives starts next month! I am really behind! lol

My favorites are mostly half hour (can you say "short attention span?"), comedies: 30 Rock, Modern Family, The Office. I also like The Biggest Loser but it's a big commitment (1-2 hours). I miss My Name is Earl. And the old Scrubs - the new ones are no good.

I like Extreme Makeover Home Edition too but Dick won't "let" me watch it. :-( (He hates it for some reason...)

I'll also try to catch American Idol when it gets down to the top 10 or 12.

We usually have the TV on after dinner most evenings while doing other stuff. So sometimes I catch shows I like, sometimes not.