Depending on what you call the 'holiday season,' we're at least half if not two-thirds done, right? I figure the big three for our seasons' greetings are Thanksgiving, Christmas and New Years. Since we've decided to pass slowly and peacefully into the new year, our celebrating is wrapping up :) 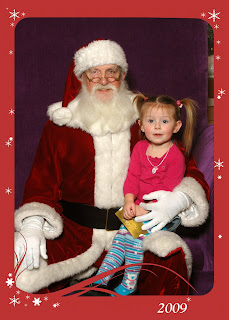 Despite my initial apprehensions (and a rather amusing result during an attempt a week earlier), Maggie did quite agreeably sit on Santa's lap last week (after an hour and a half wait, no less...). She had decided when we saw another Santa previously (whose lap she would not go near) to ask for a choo-choo train. Our biggest problem during this picture taking was that she was busy trying to tell the old guy about everything she could see: the fake snow in the show globe; her golden ticket to ride the Polar Express; her mommy; etc, etc. That's why she looks like she's in the middle of a sentence, and he looks like he's holding her hands down. What it looks like is exactly what it was :)

Christmas Eve at my parents' church was also funny. She ended up at the nursery pretty early on. After the service when we went to pick her up, the ladies working there told her, "Your dad and mom are here to get you." Maggie's response? "No fanks." She was having much more fun with her new friends and the unfamiliar toys. The nursery lady did comment on how polite she was.

Christmas morning was time for leisurely opening gifts at home before heading to the in-laws. There she got that awesome book that is recorded by the giver. So it's The Night Before Christmas read by her Uncle Momo, Georg, Grandpamamama and Pat. Very cool. She spent most of her time that day (and in the days since) serving us tea with her tea set and showing us how her disco flashlight works. Along with her dollhouse and Thomas the Train set, these are some of her favorite gifts - she really didn't get anything that she hasn't enjoyed in the days since.

Overall it was a great holiday and I feel so blessed to have seen it through her eyes :)
Posted by Becki at 4:52 PM
Email ThisBlogThis!Share to TwitterShare to FacebookShare to Pinterest

What a great Christmas.. I love watching her play and grow.

Isn't it great to see through their eyes???

I don't know what a disco flashlight it, but I think I want one ;)