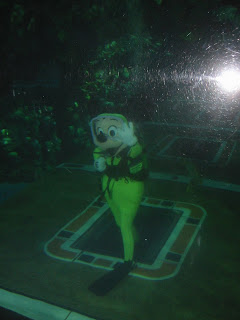 So I feel like we didn't do anything today, but yet was busy the whole time. I'm not real fond of this sort of day. I like to see what I've accomplished, instead of just treading water (hey, I had to tie the picture in somehow!)

Maggie woke up at 6:45 instead of 8:00 this morning. Bummer. I went and laid on the couch with her, thinking she'd doze a while longer, but no luck. I may have dozed a bit on my own while I was waiting for 9:00 AM to start making calls to the bank. We sold a car over the weekend and all of us just sort of glanced over the paperwork and didn't realize that the letter we had promised a release of lien, but was not actually a release of lien...until they got to Secretary of State to transfer the title to the new owners. Oops! I was able to get help this morning from Capital One on my third transfer. Unfortunately, she said they needed the VIN (vehicle identification number) and they needed to speak to the person actually on the title. I collected the last of the information and got the right person to call. It was supposed to be taken care of by the end of the day today. I'll call the new owner tomorrow and make sure. In the meantime, all this literally took less than an hour or so, but used up half my brain energy for the day!

So I was finally relaxing from the mental drain, when the phone rang again and I was afraid something had already gone wrong. Close. It was the guy I'd interviewed with two weeks ago...calling to offer me the job I decided I no longer wanted. Boy, did I feel like an ass telling him thanks, but I took another offer last week. I told him I hope he finds another fantastic candidate, and I meant it.

The next call to come in was as I was getting out of the shower. Hubby was dropping off the company car today and bringing his own car home from the office, but forgot his car key. Hey, at least this way I knew Maggie and I would make it out of the house...by necessity ;) And during this? Maggie had fallen asleep on the couch. I let her get in a short nap and figured we'd just pick up with lunch when she felt like getting up.

The pitiful highlight of my day was stopping at Walgreen's on our way back from bringing hubby the car key. I love all the Halloween stuff! We got a couple of the window decal things, and Maggie spent the next half hour at home moving them around on the window like stickers. I never would have thought we were getting that much entertainment for $3!

So how's your week rolling out?
Posted by Becki at 9:03 PM
Email ThisBlogThis!Share to TwitterShare to FacebookShare to Pinterest

your day was busy. Glad you got the car thing worked out. I'll have to get me some of those stickers for the Peanut to move around on the doorwall. Good idea.

I just love Walgreens too! They have everything in the little store and it's easy to get around and easy out.