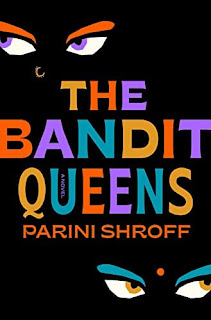 So fun, but in a setting I don't usually read - I enjoyed it!

Geeta has been assumed a widow for a while, so her name is 'mixed with dirt.' She has removed her nose ring, and the children all run from her, describing her as a monster known as a churel. Instead of being offended by the ostracism, Geeta decided she likes herself, and her solitary time. She makes her jewelry and minds her own business, except for the womens' loan group she belongs too.

Unfortunately, the women begin to rely on her for more and more - making up their missing payments that their drunk husbands spend, to start with. Soon, some group members figure if she already killed her own husband, maybe she can kill theirs too?

A series of humorous misunderstandings and attempts at fulfilling any obligations and continuing an independent life ensue. And the more that Geeta interacts with the group members outside of their regular scheduled meetings, the more she realizes maybe her loneliness has been her own as much as being shunned by those in her community. It turns out many of her assumptions about the community and it's members in recent years may have been very wrong.

I really liked the relationships and their evolutions in this story. Geeta and her lifelong friend got to know each other all over again, and Geeta became a part of her community once again. I gave this story 4 out of 5 stars and would recommend it to those who enjoy stories about communities different from their own (unless the reader is in a small village in India...), and stories with independent female characters.

Thank  you to the publisher and Netgalley for my electronic copy of this book. Receiving the book for free did not influence my review.

Posted by Becki at 4:25 PM
Email ThisBlogThis!Share to TwitterShare to FacebookShare to Pinterest
Labels: Books - 2023