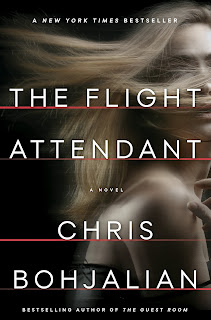 The Flight Attendant by Chris Bohjalian
Publication: March 13, 2018
Pages: 345 pages
Rating: 3 out of 5 stars ☆☆☆
Sweet Spark: At least when I count my bad choices when I've been drinking, I don't have to include leaving a dead body in a hotel room...

I picked up this one as the book-turned-to-movie/show option for my Yelp book club. While I still haven't seen the show, I might now to see that interpretation of the book.

Cassie is a flight attendant, and quite a good one, for years and years. She's had her share of adventures (and mis-adventures) over the years and around the world, but she's definitely in a full panic when she wakes up in a hotel room in Dubai next to the dead body of the man she'd spent the night with.

Since she's not only a drunk, but also known to black-out on a regular basis, she isn't really sure what happened and remembers nothing of an attack or murder. So instead of calling authorities in a country where she isn't a citizen and wouldn't have much help, she trashes everything she can think of that would tie her to that hotel room on her way back to her own hotel shuttle, which will promptly take her to 'work,' and back to the U.S.

I personally really enjoy books with unreliable narrators, so Cassie's story - that even she wasn't sure of - was right up my alley. While I could almost imagine this moving on to a series of books, the first one would be totally different from the others based on the twist it ends with, but there could definitely be spin-off stories. I gave this 3 out of 5 stars, and have heard this may be one of those odd exceptions where the show could be better than the book.

Posted by Becki at 10:13 AM
Email ThisBlogThis!Share to TwitterShare to FacebookShare to Pinterest
Labels: Books - 2022

The show is great but the latest season was just okay (first season is great). They did change a lot of things from the book IMO.