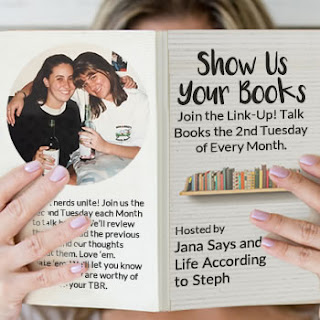 It's the second Tuesday of the month already - time for Show Us Your Books  with Jana Says and Life According to Steph.

School started last week here. While the kids only attended four days last week, we also had theater performances for the oldest - actually dress rehearsals Monday - Wednesday, and then performances Thursday - Sunday. Their high school troupe knocked Macbeth in modern English out of the park. I'm so proud, especially of my new freshman, making her way in the high school with the 'big kids.' ;)

I've only got five books to post about from last month. No excuses, that's just how it worked out.

It's Not About the Gun: Lessons From My Career as a Female FBI Agent by Kathy Stearman - Wow! Non-fiction, as I'm sure I've said before, can be hit or miss. This was a solid hit. The author's descriptions of her job and the places where it took place were colorful and fueled my imagination. Her storytelling was wonderful at illustrating the events that occurred, as well as the surrounding circumstances that influenced it all. I will disclose that her political views toward the end of the book were definitely skewed toward reasonable humans, empathy, and equal rights. If those values aren't your thing, you may not agree with the author's viewpoints of some changes in the world around the time of her retirement. I gave this book 4 out of 5 stars in my full review here. ⭐⭐⭐⭐

The Family Plot by Megan Collins - Dahlia Lighthouse and her three siblings were brought up in a very sheltered home where their mother insisted on homeschooling them - using serial killers and their victims as the curriculum. Somehow they all seemingly move on to lives out in the world, until their father dies and they return to the family home, where even more creepy secrets are revealed. My full review gives this book 3 out of 5 stars. It was a unique thriller. ⭐⭐⭐

Constance by Matthew FitzSimmons - This future-based story about clones and some of the moral results was intriguing. I've seen notice since that there's already a pre-sale for the next book in the series, set to publish later this year. The book starts out with Con dragging herself in for her latest update - they're required ever few months s
o your clone is never too far off from the current time. But when she wakes up, 18 months has passed. Con is dead, and now she's her clone, with just the old memories from her last update. She's on a mission to find out who killed her original, and why. This story line was something I hadn't seen before, and the speculation of what the future is like was interesting too. I gave this 4 out of 5 stars in my full review. ⭐⭐⭐⭐

Veritas: A Harvard Professor, A Con Man and the Gospel of Jesus's Wife by Ariel Sabar - This was a lucky month for me and non-fiction, eh? I had requested Veritas a while ago, and it took me way too long to get to, but it was fascinating! The author proved to be an incredibly detailed researcher. If a part of the con man's or the professor's story turned out untrue, instead of writing off the rest of it, the author would still research every tendril of the story - which often revealed new motivations for what or why things may have really happened. If you have any interest in the true history of religion, this book was very revealing of facts from past discoveries, and motivations behind a lot of the revelations that have come to light through the ages. While I'm not a particularly religious person, I find the business of religion fascinating. I gave this one 4 out of 5 stars in my full review. ⭐⭐⭐⭐

The Desolations of Devil's Acre: The Sixth Novel of Miss Peregrine's Peculiar Children by Ransom Riggs - This was the culmination of a series I've enjoyed all the way through. I waited a bit to get this one from the library, as I had to know the ending of all of peculiardom, told mostly by Miss Peregrine's unique charges. I think only the first one so far has been made in to a film, but I hope the others eventually will as well. Hard to describe the peculiars in just a few lines, but I'd bet you've heard a bit about them since the first book published in 2011 (and its movie was released in 2016). I gave this conclusion 4 out of 5 stars in my review, but they definitely need to be read in order to understand what's happened. ⭐⭐⭐⭐

I just started All These Bodies by Kendare Blake, and The Devil in the White City by Erik Larson (I've actually picked this one up a few times previously, but never got into it enough to finish it. This time it's for a book club on September 21 - wish me luck!).

Still on my list for this month (can I get a few extra hours, please??) are No Words by Meg Cabot, and Eight Perfect Hours by Lia Louis. Also super excited to fit in The Book of Magic by Alice Hoffman.

Fall is my favorite season, although it does bring out my dread of cold and snow... I'm glad I've got a few reads that fit a bit darker vibe. What are your perfect books lately?

Posted by Becki at 6:39 AM
Email ThisBlogThis!Share to TwitterShare to FacebookShare to Pinterest
Labels: Books - 2021, Show Us Your Books

A very good month for nonfiction - that would be really rare for me too.

Good luck with Devil in the White City. Not a fan!

Kudos to your freshman!

Best of luck with Devil in the White City. I...did not like it. I hope it's better for you.

The FBI book sounds fascinating, and as a fan of empathy and equal rights myself, I think it's a great nonfiction fit for me. Thanks for the review!

Family Plot sounds great. and I had no idea Miss Peregrines made another new book. Thanks for the info I saw it in your subsequent posts.

I want to read All These Bodies. I'm planning to read The Family Plot next month.

the FBI book sounds fascinating - will add that one to my list.
dying to get to eight perfect hours!