In case you missed it, check out Part 1. We left off after Wednesday's trip to the American Dream mall. 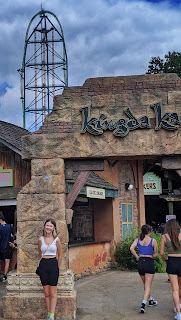 Thursday morning we headed to Six Flags Great Adventure. The kids had been googling the roller coasters for weeks! They had additionally questioned our local New Jersey friends extensively for tips about the best rides, which was amusing since they'd be meeting us there in the afternoon. Most of the rides are similar to those at Cedar Point, the amusement park closest to our house. At Six Flags, we all rode Batman (like Cedar Point's Raptor), Nitro (like Cedar Point's Millenium  Force), Bizarro, Runaway Mine Train (I still have the bruise to prove it), Dark Knight, Skull Mountain, and then after our friends arrived, we went though the fun shooter ride, The Justice League. 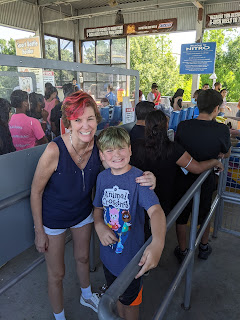 Hubby and Maggie continued on to Kingda Ka. Jack wasn't quite ready, but really regretted it later, when the ride just couldn't seem to keep running. Tears were shed later when he never got to ride that one.

Hubby and Maggie also rode Superman and Zumanjaro, while Jack and I did Batman and the Dark Knight again. Oh, and we also took a cotton candy break. Because, cotton candy. I got a super fun t-shirt that says, "I'm only here for the funnel cakes," but I didn't actually get funnel cakes til the next day.

Thursday night Jack really wanted to eat at the Ruby Tuesday attached to our hotel, but halfway back we found out they'd be closing at 8:30pm, just a few minutes after we'd get there. So we ended up at Piazza Orsillo, where one of our friends works. While it wasn't on the menu, my friend suggested the most incredible pizza! Instead of marinara sauce, it uses their vodka sauce, with cheese and basil and whatever magic they sprinkled on it. So delicious!

Friday we started out by heading to Point Pleasant. While hubby and Jack had gone there a few years ago while Maggie and I were at a baton competition nearby, it was the first time our whole family enjoyed hanging out at the boardwalk together. Since we could stay for ten minutes, or stay forever, we discussed what everyone wanted out of the day. Jack wanted to ride the train, which he had done on his last visit. Maggie wanted to shop for souvenirs. Andy wanted to get closer to the ocean without paying the almost $40 for us to go to the beach. I wanted to eat a funnel cake. 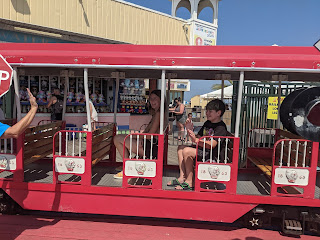 We started walking toward the end of the boardwalk, but as we got closer we realized it ended at condos, not a canal. So we turned around and got the funnel cake (and deep fried oreos!). YUMMO! While hitting each shop along the way, we went to the train at the other end of the boardwalk. The kids both picked some souvenirs, and then Jack got his train ride (with his sister along, of course).  Hubby did a bit of research on his phone and pointed the car toward Island Beach State Park to get closer to the water. It was a scenic drive and we walked the seashore for a bit before heading back to Jack's long awaited Ruby Tuesday dinner.

Saturday we parted ways for a bit - I headed to New Hope, PA with my best friend for lunch and some window shopping, and hubby and the kids took a ferry and saw the Statue of Liberty up close, and Ellis Island. We then met up with our friend's family and all took a Seastreak sunset cruise to see the New York skyline and the Statue of Liberty. It was a beautiful night and a great, relaxing cruise.

Sunday morning just involved getting up the first time I opened my eyes (a little past 6am) and getting in the car for the 10 hour drive home. I listened to The Dutch House by Ann Patchett, read by Tom Hanks, at the recommendation of some book-loving friends at Let's Peanut Butter Taco 'Bout Books on Facebook. It was a very enjoyable book (although I may have dozed a bit - audio books are so hard for me to focus on!). It was the story of Danny and his life surrounding the house he was born in. The book was very memoir style, recounting different memories that reminded him of other memories. It made me really want to see the house, larger than life in his young and adult mind. I'd give it 4 out of 5 stars. ☆☆☆☆

So now we're home sweet home, and ready for the last few frantic weeks until school starts. And then, just when I think I can take a breath, I'll start getting ready for my company's 'return to office' through September and October. Luckily my team is currently scheduled for mid-October. It could go later yet, but it won't happen any earlier. Glad I got a vacation in to enjoy and relax first!

Posted by Becki at 4:08 PM
Email ThisBlogThis!Share to TwitterShare to FacebookShare to Pinterest
Labels: Books - 2021, Memories

Sounds busy! I love roller coasters so that would be right up my alley lol.

It looks like you guys had such a fun vacation! I haven't been to an amusement park in years! That pizza sounds amazing! I've been craving a good pizza.