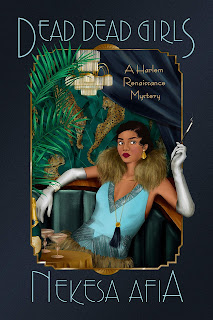 Louise Lovie Lloyd seems to have a knack for finding trouble. After being kidnapped in her teens and promptly escaping and releasing a few other girls who had been missing for longer than she had, she's grateful that her community seems to be forgetting about the time she was the 'Harlem Hero.' But suddenly, dead girls are showing up whose link is the speakeasy that's run at the same property as the diner where Louise works.

She assumes it's just a coincidence, but that doesn't really matter when everyone is worried about who may be next. Against her better plans, she ends up assisting the police in trying to find the killer. There are places a Black young woman can get into that old white cops can't.

The story of this independent woman and the friends she considers her family is interesting. One of the other residents at the boardinghouse where Louise lives is the woman she loves, Rosa Maria. Their relationship is largely a secret, but they still enjoy their nights out dancing at the speakeasy where Rosa Maria's brother tends the bar. New York City is lively and fun for them, despite prohibition.

I'm interested to see what mystery involves them next. I'd give this book 3 out of 5 stars. The characters and the setting were charming, but the plot felt a little forced sometimes. There were a few outright statements of foreshadowing, but I didn't notice actual behavioral clues about some of the story developments. I suppose that's not saying too much, since I admittedly do like to be surprised. This was a fun historical mystery that is the first in the Harlem Renaissance Mystery series.

Thank you to the publisher and Netgalley for my complimentary e-copy of this book. Receiving it for free did not influence my review.

Posted by Becki at 8:21 PM
Email ThisBlogThis!Share to TwitterShare to FacebookShare to Pinterest
Labels: Books - 2021