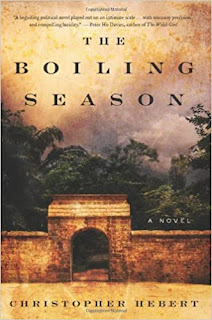 What a beautiful story, about a not-so-beautiful time.

Alexandre isn’t really trying to ignore the poor village where he grew up and those who still live there. He just wants to rise above, and doesn’t understand why anyone else wouldn’t want the same for him and for themself. While others see Alexandre as being meek and doing what his rich bosses order without question, he only sees the material comforts and luxuries he gets by playing along. Who wouldn’t want less struggles, right? He fails to see how his playing along impedes the revolution or keeps his former acquaintances living in sad shacks and squalor.

The graphic descriptions of the opulent homes and places the rich people visited were clearly presented in extreme contrast to the shanty towns and barely functioning structures where so much of the rest of the people lived. Without spoiling the story, Alexandre’s determination and life experiences save him from much exposure to those who struggle early in the book. Observing his evolution to gain more understanding of the world around him was both rewarding and sad.Overall, I’d give this book 3.5 out of 5 stars. The telling of it was gorgeous, even when the actual story progressing became more and more about conflict, violence, and personal desperation. It could be recommended to those who enjoy literary fiction and historical fiction.

Posted by Becki at 2:33 PM
Email ThisBlogThis!Share to TwitterShare to FacebookShare to Pinterest
Labels: Books - 2020