Hello, peeps! Weeks feel like they're getting busier and busier lately. I'm starting off this post with my Book Beginning with Rose City Reader and #Friday56 with Freda's Voice. Scroll down if you'd like to see my Five Things for Friday :)
This week's book I'm looking at is Matrimony, Inc: From Personal Ads to Swiping Right, a Story of America Looking for Love by Francesca Beauman. Thank you to the publisher for my copy of this book for review. Receiving the book for free of course doesn't influence my review. 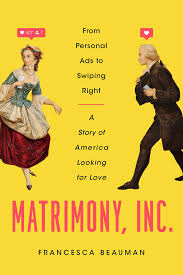 On February 23, 1759, the front page of Friday's Boston Evening Post greeted readers with an account of the latest skirmishes in the Severn Years' War. The owner of a brown leather purse lost last Friday offered a reward for its return and there was an announcement that a brig named the Hannah had just docked, bringing with is supplies of cutlery, shoes, and raisins, all now for sale on Third Street.

The year 1860 was a leap year, and Kate Darsie was in the mood for love: "As it has become fashionable in the Eastern as well as the Western cities for young ladies as well as gentlemen to make known their wants through the columns of a public journal, and as this is the year when ladies can make free to do so," Kate explained, she had decided to place a marriage ad in one of Philadelphia's biggest newspapers.

So far it's an interesting and amusing read. I'm looking forward to finishing it this weekend.

Posted by Becki at 2:58 PM
Email ThisBlogThis!Share to TwitterShare to FacebookShare to Pinterest
Labels: 10 Random Things for a Friday, Book Beginnings on Fridays, Friday56

I know you said you were disappointed about your old job, but yay for a new job! And those Reese's bars sound delicious.

Aww I’m sorry to hear about you losing the lunchroom job. Sometimes change is good! It will be a chilly winter with the sign though. Time for some hand warmers! I love those things.

I’ll be looking forward to hearing about your Reese’s bars! Have a good weekend.

This has been a tough job market right now. Sorry about the tears over you not being at your sons school anymore, but glad you found a replacement job.

Haven't heard of this book before now--thanks for sharing it.

Sounds like a fun read! This is my first time seeing it. Thanks for sharing! Hope you have a great week! :)

This book sounds like a lot of fun. I never thought about the history of personal ads.

Hope your new router, etc. worked ok. I never like messing with that stuff and, since I'm the IT officer at our house, it falls to me.

That book is sure to cheer you up. So many people has lost their jobs here in SA. Very sad and scary. I'm glad you found something again!

Have a wonderful week and good luck....

That book sounds fascinating! Good luck with the internet stuff too! :)

I hope you enjoy your new internet set-up! And Matrimony Inc!