We Didn't Ask for This - Book Review 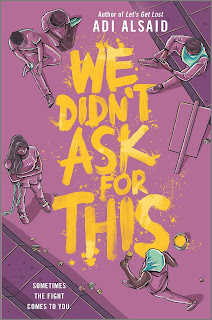 What a cast of characters! This felt like the sort of book that would be fun as a movie or play. Most of the characters were of equal importance. While there was one in charge of organizing the protest, and a small group of 'bad-guys,' I liked each of the other characters for different, individual reasons that not everyone would agree on.

There was not a lot of character development as much as introduction. The characters were presented with just a few of their defining characteristics, and something that could almost help set up a stereotype of them. The readers' conclusions for what that may say about each character was up to them, and while it may make the characters somewhat variable between readers, the story line still developed in probably a close-enough way to everyone else's interpretation.

The extra drama, while entertaining, seemed a bit far-fetched. I don't want to spoil it, but I'll leave it to say there were several unexpected plot twists toward the end. It was also curious that there were more LGBTQ love stories than hetero love stories. Not good or bad, but I wonder how truly representative it was of a high school.

Overall, I enjoyed this book and would give it 3.5 out of 5 stars. I would recommend it to middle schoolers and high schoolers. It wasn't explicit in anything, which I feel would make it acceptable for the middle school (ages 12 - 14 or so) as well as older YA readers.


I received this book from Netgalley in exchange for my honest review.
Posted by Becki at 11:59 PM
Email ThisBlogThis!Share to TwitterShare to FacebookShare to Pinterest
Labels: #2020NewReleaseChallenge, Books - 2020

I want to know more about the plot after your review ... but I like the cover so I've pinned it to my 'books I want to read' board for now, haha.

Hmmm...as you said, sounds like a good teen book. I love some good twists and turns though! Thanks for the review.