I feel like my random Friday would be pretty lame. In the last week, I went to get groceries once (last Saturday), had to report to a work meeting on Monday, and then went to the meat processing plant today (to pick up a 1/4 of a cow - yay!). Ten random things of my week of mostly reading would be really lame. LOL Instead, let's stick with the books :)

Today I'm joining in on the Book Blogger Hop from Ramblings of a Coffee Addicted Writer. 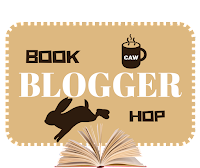 If you could add one interactive feature to reading books, what would it be?

Well, my first thought is a way to look up the meanings of words, except I bet my kindle could do that and I just don't know how. LOL If that already exists, I guess next it would be awesome to have access to pictures of things, and not just definitions. For example, I recently finished reading The Grace Kelly Dress, and it would have been cool to have a photograph of the real Princess Grace in her wedding dress. Or when I'm reading books based in other countries (like The Henna Artist in Jaipur), pictures of some of the home or clothing design features that I wasn't familiar with.

Next up is the Book Beginnings Meme from Rose City Reader. Right now I'm reading Ninth House by Leigh Bardugo. Before the map of Yale, there are two passages. The first one is in something that isn't English (maybe Spanish?), and doesn't seem to translate to the second passage. So for this meme, I'm sharing the second passage, which I suppose is technically before the beginning of the book, but I like it anyway.

There is a girl, a girl who does not fear death
Because she has her father and her mother and her twelve hunter brothers,
A home of three floors and a barnyard farmhouse,
In the middle of the farm, an apple tree that gives love apples in the winter and summer.
In the farm there are seven grottos,
Each and every grotto secured....
Death was light and slipped in through the lock.
--Death and the Girl, Sephardic ballad

Last but not least (maybe I should mix up the order next time?) is the Friday 56 hosted by Freda's Voice.

Here's my chosen excerpt from page 56 of Ninth House:

She glanced back at the Grays gathered around Payne Whitney. Was it her imagination or was there something in the bent of their shoulders, the way they huddled together by the gymnasium doors? Alex knew better than to look too closely, but in that fleeting moment she could have sworn they looked frightened. What did the dead have to fear?
She could hear Darlington's voice in her head: When was the first time you saw them? Low and halting, as if he wasn't sure whether the question was taboo. But the real question, the right question, was: When was the first time you knew to be afraid?Alex was glad he'd never had the sense to ask.

That's it for my Friday - I'm 26% through Ninth House so far and excited to get back to reading! Here in Michigan, we're still practicing social distancing, so it's the perfect time to read! Wishing for the very best for you and yours :)
Posted by Becki at 1:24 PM
Email ThisBlogThis!Share to TwitterShare to FacebookShare to Pinterest
Labels: Book Beginnings on Fridays, Book Blogger Hop, Friday56

Pictures are a great idea! Enjoy your weekend :)

I'm curious about the 1/4 of a cow! Is that one of those meat sharing things? If so I've heard of that before.

And I just started reading Little Fires Everywhere (and also watching the show) - both are really good.

I can't wait to read this one myself!

Yes there is a way to look up words with your kindle, you just press the word and options come up :D

But anyway, that is a good answer! you're right, sometimes my imagination isn't enough and pictures would be cool!

Thanks for stopping by ;)

I've been really curious about this book. Hope you're enjoying it! Have a great weekend! :)

I love the interactive book idea. I wonder if Kindle has that option. Your picture idea would save lots of time searching the internet too!!

I like that Sephardic ballad! It makes me curious how it's going to relate to the story. Oooh, that 56 quote is delightful and spooky! I think I really need to pick this one up some time. :3